French shipping major CMA CGM has launched its low-carbon shipping offering based on biomethane as part of its Act with CMA CGM+ range of services.

The new CLEANER ENERGY biomethane solution will be offered on the group’s intra-European line run by its Containerships brand.

With the new service, Containerships will offer guarantees of origin of biomethane to its customers, enabling them to cut their CO2 emissions by at least 67% on a well-to-wake basis (full value chain) when shipping within Europe, according to CMA CGM.

“Through the purchase of CLEANER ENERGY biomethane, customers will be supporting the development of this non-fossil energy and will receive an official certificate stating the quantity of biomethane allocated to the shipment of their goods and the corresponding reduction in CO2 emissions,” the group said.

The launch was announced back in April 2021, when the company said it would the support of the production of 12,000 tons of biomethane (equivalent to one-year’s consumption of two 1,400-TEU vessels).

Biomethane is a renewable green gas produced from sources
including organic and plant waste from European agriculture that is processed at methanation facilities.

Guillaume Lathelize, Senior Vice-President, Sales and Marketing, said that through the use of a non-fossil-fuel energy, the company was enabling its customers to “reach a new milestone in improving the environmental performance of the shipment of their goods.” 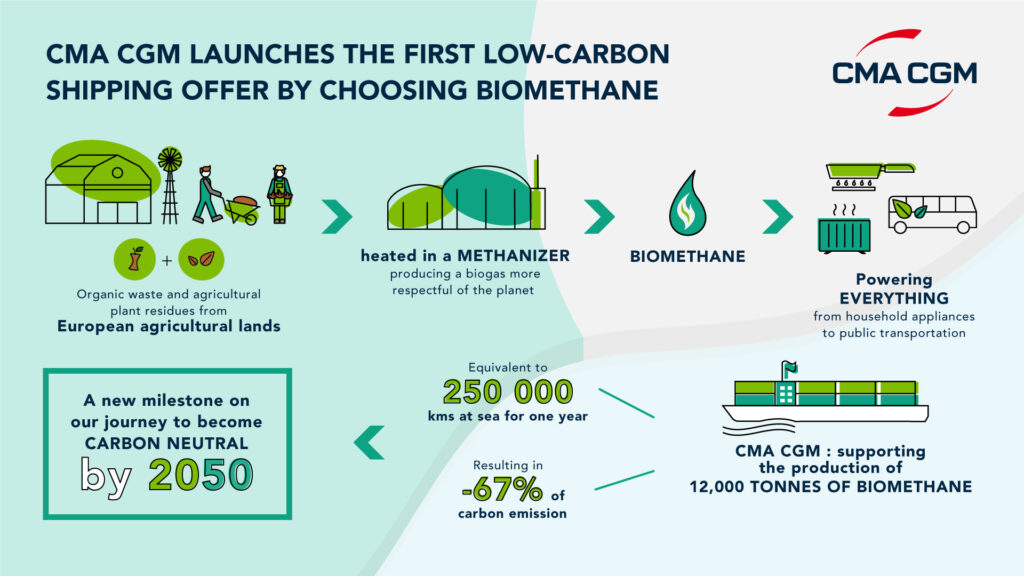