The Digital Container Shipping Association (DCSA) believes that the potential of eliminating paper from trade and digitising bills of lading might be sped up in the post-COVID-19 reality.

As explained, despite the enormous potential in savings of time and money, the promise of an electronic bill of lading (eBL) for the container shipping industry has remained elusive.

In fact, Tradelens goes so far as to call an eBL standard the “Holy Grail of global trade”.

Despite the lack of a standardised approach to digitalisation, some carriers and solution providers have continued to move forward with proprietary eBL initiatives, albeit at a limited scale.

“The COVID-19 situation is bringing the core strengths of a standardised eBL to the fore. Cargo in ports cannot be gated out because of paper that is stuck elsewhere due to airfreight delays caused by the pandemic,” André Simha, Global Chief Digital & Innovation Officer for MSC and DCSA Chairman said.

According to a financial modelling exercise carried out by DCSA, it is estimated that the industry can potentially save more than $4 billion per year if 50% eBL adoption is achieved.

“If we start on standardising eBL now, we have reason to believe a 50% adoption rate is feasible by 2030,” DCSA said.

Achieving acceptance of electronic documentation for something as critical as the bill of lading requires maintaining the integrity and uniqueness of the document as it makes its way along the supply chain. In the past, technological limitations have made this difficult in a digital format, partly due to the negotiable properties of the BL.

However, the association believes that new technologies such as distributed ledger technology (DLT), peer-to-peer and Blockchain offer potential solutions for eliminating the risk of a single catastrophic failure or attack that would compromise the integrity and uniqueness of an eBL.

Concerns over legal enforceability have also been a barrier to widespread adoption of the eBL. Not every government has provisions for an electronic form. Many of them require paper, and the lack of industry-standard language and definitions have made it impossible for them to “rubber stamp” an electronic replacement.

But progress is also being made in this area, and accelerated as a result of the COVID-19 crisis. A number of DCSA members have reported a sharp increase in eBL adoption in an effort to keep trade moving. In addition, the International Group of P&I Clubs (IGP&I), have picked up the pace on approving eBL solution providers, with two added in the last six months to a total of six approved so far.

“Digital standards will enable interoperability between all stakeholders, such as system providers, shippers, carriers, banks and regulators. Different parties can be involved in a transaction as long as they have implemented the standards. Once a standard eBL is available, it will also be easier for regulators, banks and insurers to accept the eBL as a viable alternative to a paper BL,” DCSA added.

It is important to note that the BL is only one of several documents that must be implemented in an electronic format to bring full digitalisation to the container industry.

This month, DCSA plans to embark on an initiative to enable the open collaboration necessary for achieving full eBL adoption. As part of this initiative, DCSA wants to develop open source standards for necessary legal terms and conditions, as well as definitions and terminology to facilitate communication among customers, container carriers, regulators, financial institutions and other industry stakeholders.

“DCSA’s mission is to drive alignment and digital standardisation to enable transparent, reliable, easy to use, secure and environmentally friendly container transportation services. Digitising documentation, starting with the bill of lading, is key to the simplification and digitisation of global trade” remarked Thomas Bagge, CEO of DCSA.

“We invite industry stakeholders to work with us to create standards that will make the eBL maximally useful and relevant for ensuring their goods are delivered safely and seamlessly to their final destination.” 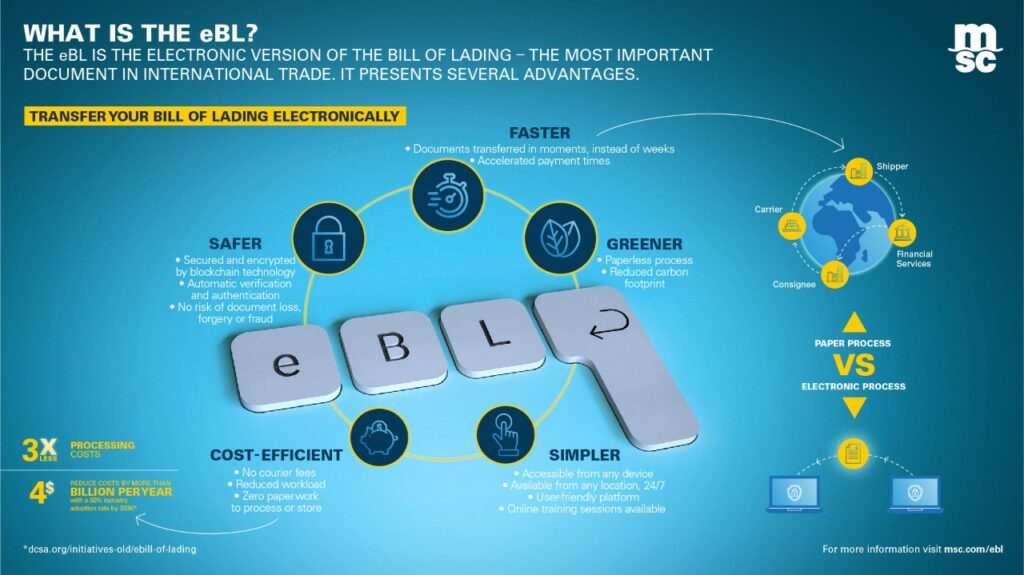 MSC rolls out new electronic Bill of Lading
Posted: 11 days ago
DCSA rolls out standards for e-bill of lading
Posted: 5 months ago
ZIM steps up investment in WAVE BL blockchain tech
Posted: about 1 month ago