The ultra-large boxship, named Ever Aria, is a sister ship to Ever Alot, which was delivered to the container shipping company in June this year. Both boxships have been flagged in Panama. The duo has claimed the title of the world’s largest containerships.

The delivery was announced on September 13, twelve days ahead of schedule, the shipbuilder said.

Ever Aria is part of nine vessels being built by Hudong-Zhonghua Shipbuilding in China to ABS class.

The 24,000 TEU containerships have been independently designed by Hudong Zhonghua, and they are fitted with a myriad of green features including high efficiency, energy-saving, and safety solutions in line with Tier III emission requirements.

As disclosed, the ships have a bulbous bow design, large-diameter propellers, and energy-saving ducts to ensure low energy consumption. They are also fitted with hybrid scrubbers.

The 400-meter megamax-24 type ship will serve ports between Asia and Europe. It can load more than 24,000 standard containers at a time, and the maximum stacking layer can reach 25 layers, which is equivalent to the height of a 22-story building. According to its builder, it can carry 10% more weight than a 23,000 TEU containership.

One more vessel from the series is expected to be delivered by the end of this year, while another five ships are at different stages of construction. 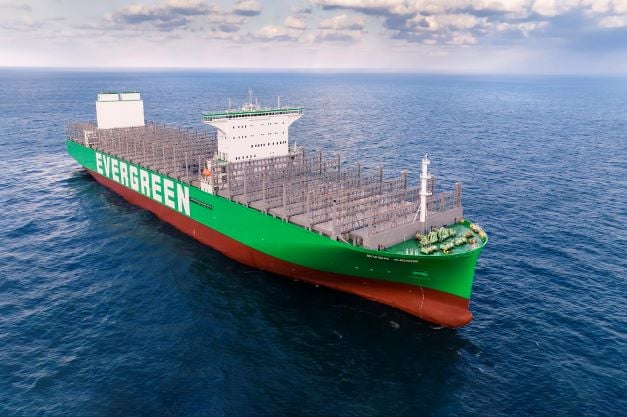