A Seattle-based tug and towing company Foss Maritime has joined forces with autonomous vessel software and systems provider Sea Machine Robotics to integrate autonomous systems on a tugboat set to deliver this month.

The tugboat, named Rachael Allen, is the fourth of several new ASD-90 tugs under construction at Nichols Brothers Boat Builders, in Freeland, Wash.

According to Foss, the 90-ton bollard pull tug will be the first U.S.-Flag harbor tug to integrate autonomous systems in real-world commercial operations. The project also marks Sea Machines’ first installation of an autonomy system on a vessel over 5,000 hp.

Rachael Allen will be equipped with SM300 autonomous command and – control system, incorporating transit autonomy, as well as remote access to the tugboat’s onboard machinery.

This feature allows the crew to manage and support operations no matter the distance – onboard or from shore. Further reduction of risks is achieved through navigation obstacle detection and avoidance capabilities.

“Foss is leveraging Sea Machines’ cutting-edge technology to take on the routine work and allow crew to focus on higher-level tasks and improve safety, while also increasing productivity and efficiency during harbor operations,” Foss’ Will Roberts, President and CEO said.

Rachael Allen is powered by two, Tier 4 compliant MTU 16v4000M65L diesel engines, producing 6,866 horsepower, which is enough to support the fully integrated SM300 system. The hardware and software systems are planned to be activated in several phases over the course of six to nine months.

Once delivered, the vessel will be deployed to Foss Maritime in California, where it will provide tanker escort and ship assists.

“Our technology has been in use aboard commercial vessels around the world for nearly three years and is backed up by thousands of hours of testing and validation,” Sea Machines’ Michael G. Johnson, founder and CEO concluded.

In 2020, Sea Machines and Foss teamed up in support of Sea Machine’s multi-year Other transaction agreement by the U.S. Department of Defence (DOD)’s Defence Innovation Unit (DIU). The duo outfitted a remotely commanded deck barge to land helicopters and host a scaled fuelling station for aircraft, surface vessels, and shore replenishment using the SM300 tool. 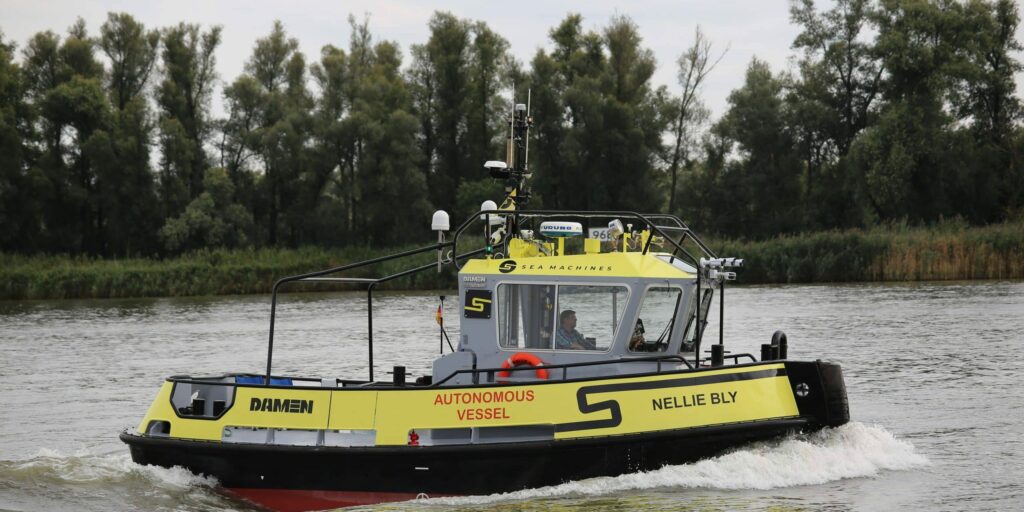