While offshore wind has performed strongly during the pandemic, continuing with next to no business interruption, the sector still faces some significant supply chain risks. This is according to an insurance company specialising in renewable energy, one of few businesses with the capability to comprehensively assess the offshore wind industry through this lens.

Over the past year, marked by the pandemic’s impact on multiple sectors and operations, offshore wind has largely maintained a ‘business as usual’ approach, with new projects continuing to be constructed despite occasional project handover delays and instances where personnel have been stuck offshore for long periods. Though the latter poses a risk of its own, the industry has been fortunate in that no major incidents or significant disruptions to project development have been caused as a result.

The global offshore wind industry has not been completely shielded from loss-incurring risks however, which are predominantly found in the supply chain according to Andries Veldstra, Senior Underwriter at GCube Insurance, which has been working in the offshore wind sector since its birth and is currently involved in approximately 75% of European offshore wind projects today.

“One of our main focus areas today is Quality Control and risk transfer within the supply chain“, Andries Veldstra said in an interview with OffshoreWIND.biz, spotlighting the two most immediate issues the insurance industry is dealing with at the moment. Inferior component quality is leading to project losses down the line, and supply chain risks are being transferred to offshore wind farm developers, and ultimately to insurers once an insurance policy is signed. This has become an increasingly heavy financial burden as offshore wind farms have continued to increase in scale.

Although insurance premiums for utility and smaller scale projects differ little, as it is calculated on a project’s capex, the risks for developers increase as offshore wind farms increase in size. The larger the project, the more risk the developer retains and the riskier the project becomes, in part due to the greater distance larger offshore wind farms are built from shore and the greater number and complexity of components. So, though there may be little difference in terms of the insurance premium, there will be higher deductibles in place for larger offshore wind projects.

“If you look at the losses that we see in the [offshore wind insurance] industry, they are very often a result of defective materials which we fear is the result of cost cutting impacting quality. We have genuine concerns for offshore wind’s insurability over the longer term as we are seeing operational losses well before the expected lifetime of a windfarm runs out. Usually, low quality is an outcome of below par workmanship which leads all the way back to the tendering process where we know the most competitive price still to be the deciding factor”, Veldstra said.

According to GCube’s data, gearboxes are failing more frequently than export cables during the operational phase, but export cable failure has had a far greater financial impact and as a result brings more significant losses. During the construction phase, defective components generate the most severe claims and are as frequently a cause of a loss as contractor error. Foundations are also notably high when it comes to the severity of losses.

GCube cautioned the offshore wind sector about subsea cable failures and project losses back in 2016, when the company said that at least ten subsea cable failures claims were filed to insurers each year in the offshore wind sector. Almost five years ago, the company also stated that the financial severity of these incidents upon developers, project owners and offshore transmission owners (OFTOs) was continuing to grow – to the point where they were accounting for over 75% of the total global cost of offshore wind farm losses.

Despite this, manufacturing and logistical risks within the supply chain are still being passed on all the way to the insurer, according to Andries Veldstra.

“We are now in the process of narrowing insurance policy terms since there have been some significant losses in the last couple of years”, Veldstra said. “We have been experiencing a so-called soft insurance market where the terms and conditions offered have been too wide, while the premium has been too low and the losses too big. Currently, we are in a process of a hardening market, where as an insurance industry we need to take stock and ask for the risks to be shared responsibly throughout the supply chain”.

To ensure the sustainability of the offshore wind insurance market, and therefore the broader offshore wind market as well, responsibility for risks need to be shared more equally. For example, manufacturers should guarantee to their clients that 100% of all subsea cables are quality tested to avoid early cable losses in a project’s lifetime. It is not uncommon to allow manufacturers to provide only partial proof of testing and quality assurance – whereby the risk of already damaged or defective components is passed directly on to contractors, developers and insurers – potentially increasing the overall financial impact of the claim.

As the offshore wind insurance market is centred around losses caused by physical damage GCube has witnessed very little impact from COVID-19 on the offshore wind industry at least. However, the company did foresee potential issues arising in the supply chain from the lack of the available of personnel, due to the implementation of social distancing measures, which could have led to considerable project overheads and delays. Instead, GCube has found that, compared to other industries, offshore wind has largely continued with business as usual.

“We have heard of vessels with crews being stuck on board for long periods, which poses safety risks and causes distress to the crews, but overall COVID-19 has not had a significant impact on the offshore wind or broader renewable energy sector. It has definitely impacted the insurance industry very heavily, but not so much in offshore wind”, Andries Veldstra said. “What we have seen as a result of the pandemic are delays in the handover of projects. As GCube provide ‘Build & Operate’ insurance – where we underwrite a policy which covers the construction period and the first year of operations – these handover delays from the construction phase to operational phase does mean an extension of risk for insurers.”

Veldstra went on to say that the fact that the offshore wind industry continued to progress during the pandemic was a compliment to the industry’s maturity. “While there are technologies like floating wind which are at an earlier stage of development, fixed-bottom offshore wind farms have been around for over 25 years which has helped the industry overcome supply chain and personnel challenges.”

The maturity of the markets is also what differentiates floating and fixed-bottom offshore wind from an insurers point of view according to GCube, which already has experience in insuring both types of technology.

Floating wind projects are still very prototypical from an insurer’s perspective, according to Veldstra, who added that dealing with a floating wind project which uses technology originally designed for fixed structures created more uncertainty and risks. The greater movement of floating structures could increase the likelihood of earlier than anticipated metal fatigue and lead to unpredictable, and therefore riskier, behaviour. As a result, floating offshore wind projects will likely lead to higher premium rates, deductibles, and greater limitations on the coverage that insurers can sustainably offer.

“We see the great potential, and indeed necessity, of floating wind globally as not all coastlines have the shallow waters needed to accommodate fixed bottom foundations”, Veldstra said. “But simply from a technical standpoint, insurers prefer these highly vulnerable and expensive wind turbines to be securely fixed, static and exposed to predictable risks, rather than having mooring lines and cables being continually pulled around due to constant tidal motion”.

With more developments in and around offshore wind on the horizon soon, it was interesting to understand an insurance company’s perspectives on new technologies and innovation, especially energy islands, which will incorporate several different technologies and involve construction works much further offshore.

“We are not yet being asked to insure these projects, but they should not pose a problem for us. As a combination of techniques these projects can be considered to be prototypical and new to the market, and they will undoubtedly come at high investment cost”, Andries Veldstra said. “The building of a sandbank, or land reclamation with associated civil works, and addition of generators and solar fields on these islands next to semi-offshore turbines will all be things that we have insured in the past individually, and we should be able to use our existing policies to continue providing comprehensive coverage.” 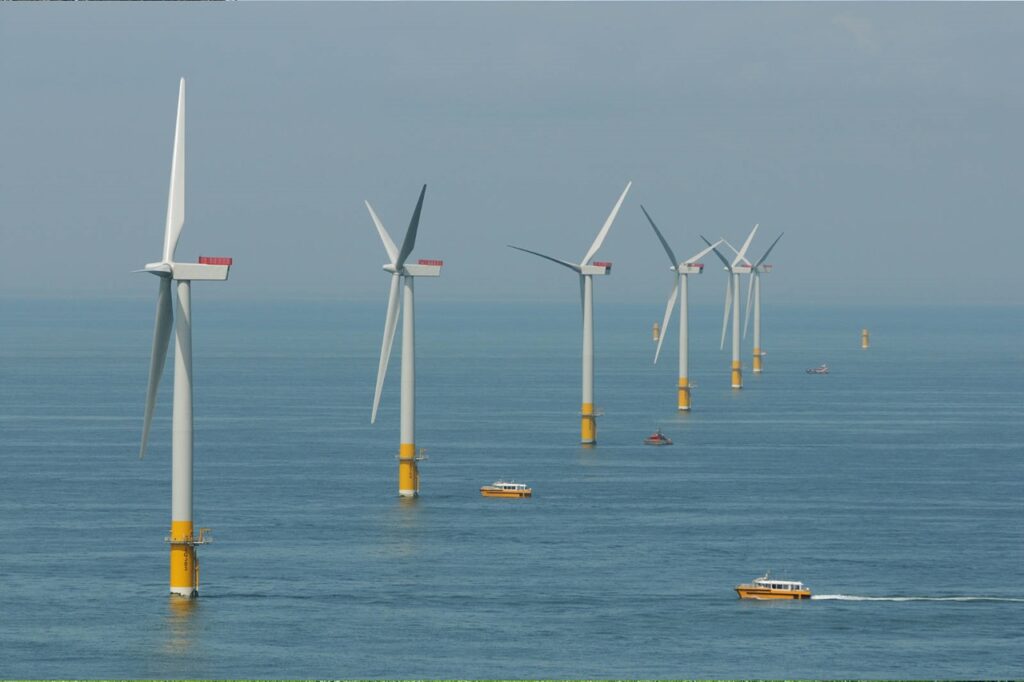