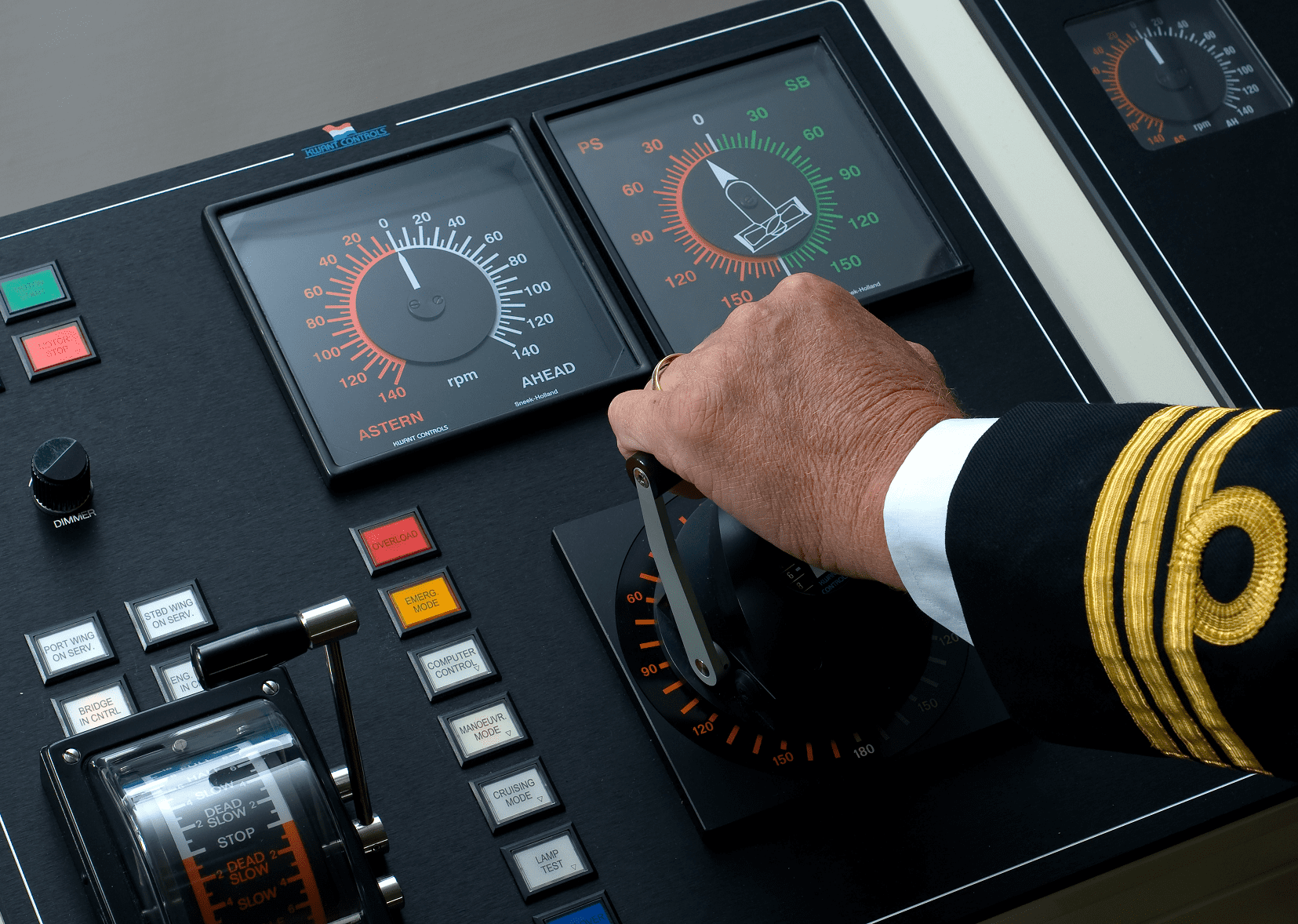 The current generation of maritime remote-control systems has countless features to ensure ship safety: system redundancy, smart sensors and control algorithms, to name a few. However, one feature that is still surprisingly scarce in the industry, is advanced haptic feedback to the operator.

Haptic feedback specialist
According to Emil Koppen, R&D Manager at Kwant Controls, haptics are a great asset to maritime control systems. “Haptic feedback can assist ship operators in intuitively controlling their vessel’s motions, by providing natural limits to the operating range of control levers,” he says.

Based in Sneek, the Netherlands, Kwant Controls specializes in haptic feedback. The company develops and produces a full range of nautical controls. From propulsion to azimuth control units, and from steering and motion control units to joysticks. A significant amount of all seagoing vessels worldwide is equipped with Kwant Controls’ products.

The sense of touch and movement
Haptic technology is not a new phenomenon at all. It is very common in the automotive industry and many others. The vibrations on your smartphone are a form of haptic feedback, too.

Within the field of haptics, one of the most important subjects is human perception.

A haptic device is a mechatronic device designed to provide force (kinaesthetic) and vibro-tactile feedback, coupled to an indirect interaction with a real and/or virtual environment. Kinaesthetic feedback haptics are used in devices that interact with muscles and tendons, giving users the sensation of force being applied. Vibro-tactile feedback is used in devices that interact with the nerve endings in human skin that indicate heat, pressure and texture. It is critical to ensure that the level of haptic feedback is sufficient for task completion while being comfortable for the operator. The capabilities of the human sensory system are important for successful haptic control design.

(Dynamic) dry friction is a complex phenomenon, arising as the force that resists the relative motion of (solid) surfaces sliding against each other. Dry friction could entail a heavier friction sensation on the throttle while the engines are cold, for example. Once the engines reach their operating temperature, the haptic device moves smoothly, without friction. It could also be used to limit the steering angles on cruise ships at higher speeds. The operator remains able to steer such courses, but the dry friction in the control equipment will remind him that his course might be causing discomfort to the passengers.

Spring force
The kinaesthetic spring force feedback is a haptic pattern where the force is directly related to the position and movement direction. The force always points in the negative direction to the motion, so it works against the operators’ movement. This ensures that when you steer a lever one way, it automatically returns to the zero-position. You can also put a spring return on a throttle at, say, 80% power output. As soon as you push the throttle past that limit, the spring return makes you feel resistance, alerting you that you are demanding maximum power.

Detents/bumps/clicks have been known for decades, as a ‘click’ sensation at certain positions, such as zero. Think of the climate control in your car, for instance. The position references in it allow you to turn your thermostat to ‘zero’ intuitively, without having to look at it.

Vibro-tactile haptics, expressed in this case as a vibration which can be described in terms of intensity, rhythm, and duration. Vibration can be used for the identification of forbidden zones. If you have two azimuth thrusters on a vessel, you could implement a forbidden zone on the thrusters’ steering positions in correlation to one another. An intermittent, serrated sensation provides a warning signal if you position them against each other at a certain speed.

Rapid prototyping with a haptic mechatronics device
To develop its advanced haptic controls, Kwant uses a rapid prototyping platform. This development starts with an (approximated) physical model and control algorithm in Controllab’s 20-sim.

The set-up is then simulated, whereby the physical model is optimized and validated with measurements. If the obtained results meet all requirements, the control algorithm is loaded onto the target via Controllab’s 20-sim4C and further validated and calibrated.

Kwant Controls uses the Bachmann platform, equipped with various IO’s, to develop, validate and calibrate control algorithms on. Yet developing an algorithm is one thing, parametrization is another. “The more complicated a control algorithm is, the more you need to finetune it, and monitor the performance as accurately as possible” says Mr Koppen. “And that is all foreseen on the Bachmann platform” he adds.

From simple programming tasks to altering and saving parameters, to reading signals at the correct speeds and comparing them; smoothing out all the side issues on an embedded board would take an insane amount of time. “Rapid prototyping with the Bachmann platform allows us to realize the development of such an algorithm in less than six months. If we were to write software the conventional way, on an embedded target that we developed ourselves, it would take us up to a factor four of time to complete the process. Additionally, the integration of the control algorithm on our own embedded controller went extremely smooth with this fully tested control algorithm module,” states Mr Koppen.

Tremendous time savings
“These major time savings allow us to speed up our own processes simultaneously. Moreover, the system makes it possible for Kwant Controls to work on several developments in parallel,” explains Mr Koppen. “We can create control algorithms while developing embedded firmware for new micro controllers at the same time – something that wouldn’t work in a conventional system, because the basic firmware requirements would first need to be finalized.”

Once the final set of parameters has been determined in a practical setup, it is loaded back onto the model, so that a new version of the control algorithm can be built with the latest parameters. “It is a closed loop between developing the simulation environment, testing hardware, loading parameters back onto the model and making software adjustments,” says Mr Koppen.

When everything is operational, the company continues on a custom-made embedded circuit board. Mr Koppen elaborates: “We put the Bachmann PLC to great use during the testing and developing stages, but we do not incorporate it in our final product. Every time a change or upgrade is made to the control algorithms, it will be simulated and tested on the Bachmann platform before we integrate to our custom-made target.”

Full haptic controllers
“The release of the fully developed mechatronic haptic device is a fact, containing advanced haptics assisted by a high amount of illumination. The next step is getting everything configured and training the operators, which is essential to achieve the required intuitive level” explains Mr Koppen. The haptic device features full haptics on three axes; in the throttle, in the steering lever, and in the outer ring, which allows the user not only to control the joystick, but also to set up the autopilot controls.

Innovative partners
Controllab and Bachmann are not the only allies that Kwant Controls works with to develop its haptic products. The company joins forces with innovation-driven partners such as the Technical University (TU) Delft, Universiteit Groningen, Hanze Hogeschool Groningen and the Innovation Cluster Drachten. They also work with the Offshore Simulation Centre in Norway, where they send their prototypes for testing.