Huisman, the worldwide specialist in lifting, drilling and subsea solutions, recently introduced a new series of large offshore cranes. The new series include cranes with lifting capacities ranging up to 900mt and have been developed to meet the increasing demands of the offshore construction and subsea market.

Multiple unique features have been incorporated in the design, which makes these sophisticated cranes suitable for operations in ultra-deep water but also in harsh marine environments. Two orders for the new cranes have been received already.

The main hoist of the new cranes will be outfitted with either a 300mt or 450mt traction winch. A storage winch will be placed in the hold of the vessel to keep the center of gravity as low as possible. This winch can either store 200mt, 400mt or 600mt of wire rope. The wire rope can be reeved into two falls to achieve the maximum capacity. “Our intensive research and the operational feedback from our clients have convinced us not to use single fall for these cranes. Besides the obvious handling problems with very large diameter wire ropes, the short life span results in tremendous operational expenditures for the operator” says Sales Manager Gerben Roks. For this reason, Huisman has developed a patented anti-twist device to mitigate the risk of the twisting of lower block and wire rope (‘cabling’) during subsea lifts in double fall configuration.

Heave compensation on the main hoist is achieved by using a combined active and passive system. The passive part allows for a significant increase in the weather window since it reduces the dynamic loading on the crane during splash zone lifts up to 50%. Further, it includes built-in redundancy since the passive system is fail-safe. The active part allows for an excellent active heave compensation performance at a low power consumption. This type of AHC system also largely mitigates the wear and tear on the wire rope compared to traditional AHC systems since there is no drum crushing or wire rope cut-ins on the winch and the number of sheaves is minimized. Further all sheaves have a diameter ratio of 25 compared to the wire rope. 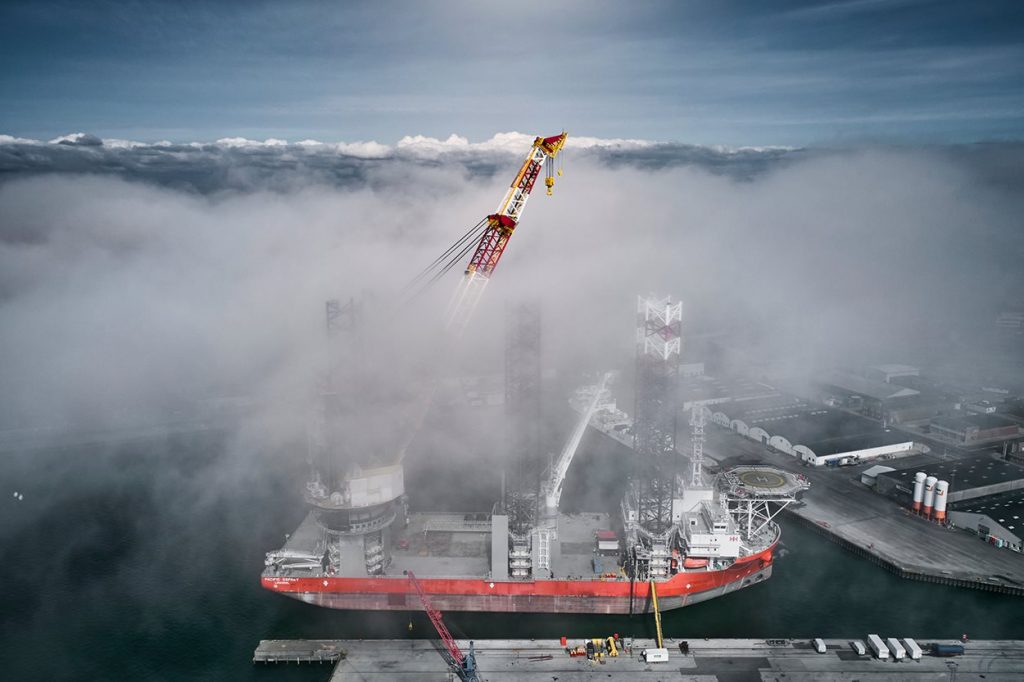