The GG5G newbuild uses traditional fossil fuels during operation and battery power when in port. Featuring a length of 238 metres, a width of 34 metres and a service speed of 20.8 knots, Eco Valencia is capable of transporting over 7,800 lane metres of rolling units, equivalent to approximately 500 trailers.

The vessel, flying the Italian flag, is the largest short sea RoRo vessel in the world, according to Grimaldi.

“The delivery of the Eco Valencia represents an important milestone not only for our company but more generally for short sea shipping in the Mediterranean,” Emanuele Grimaldi, Managing Director of Grimaldi, commented.

“We are deploying increasingly efficient ships with an ever lower environmental impact in the ‘Mare Nostrum’, for the benefit not only of our customers but also of the communities in the cities we serve.”

In addition to classifying the ship, classification society RINA assigned the ship the additional “Green Plus” class notation, a certification in the field of environmental sustainability. The “Green Plus” recognizes the design solutions, on-board systems and operational procedures put in place voluntarily, both during the construction phase and during the operation of the ship, aimed at improving environmental performance beyond the minimum levels required by the relevant international regulations.

The GG5G class design was conceived by the Grimaldi Group Technical and Energy Saving Department in partnership with the Danish naval design studio Knud E. Hansen. Design elements include, among others, an air lubrication system – which will let the ship also obtain the “AIR-LUB” notation certified by RINA; a Rolls-Royce propulsion system optimized with blades featuring propellers, an integrated propulsion system between the rudder and propeller (Promas Lite), a waste heat recovery system as well as silicone coating on the hull.

All the new GG5G-class vessels will use latest-generation electronically-controlled engines which are powered by fossil fuels during navigation and by electricity while at berth, guaranteeing “Zero Emissions in Port”. During stays at berth, they are capable of meeting the energy demands of on-board activities with just the electricity stored in lithium batteries that are recharged during navigation thanks to shaft generators and 600 square metres of solar panels.

Moreover, exhaust gas cleaning systems are installed on board the GG5G ships to reduce sulphur and particulate emissions.

Of the twelve units of the GG5G class, nine will be deployed in the Mediterranean Sea and another three will be operated by the group subsidiary Finnlines in Northern Europe.

Eco Valencia will enter service between Italy and Spain, calling regularly at the ports of Livorno, Savona, Barcelona and Valencia.

Grande Florida is the fifth in a series of seven pure car & truck carriers (PCTCs) ordered from the Chinese Yangfan shipyard located in Zhoushan.

In early September 2020, Grande Florida’s sister vessel, Grande New Jersey, was handed over to Grimaldi from the aforementioned yard.

The ships will be deployed on the weekly RoRo connection operated by the Grimaldi Group between the Mediterranean and North America (Canada, United States and Mexico).

The vessel is among the largest PCTC on the market as it can transport around 7,600 CEU or alternatively 5,400 linear metres of rolling stock and 2,737 CEU.

From an environmental point of view, the Grande Florida was built by adopting technologically advanced systems and devices, ensuring high energy efficiency and eco-sustainable transport. Specifically, the vessel is fitted with an electronically-controlled Man Energy Solutions main engine, as required by the new regulations for the reduction of nitrogen oxide (NOx) emissions, as well as with an exhaust gas cleaning system for reducing sulphur oxide (SOx) emissions. Finally, it complies with the latest ballast water treatment regulations. 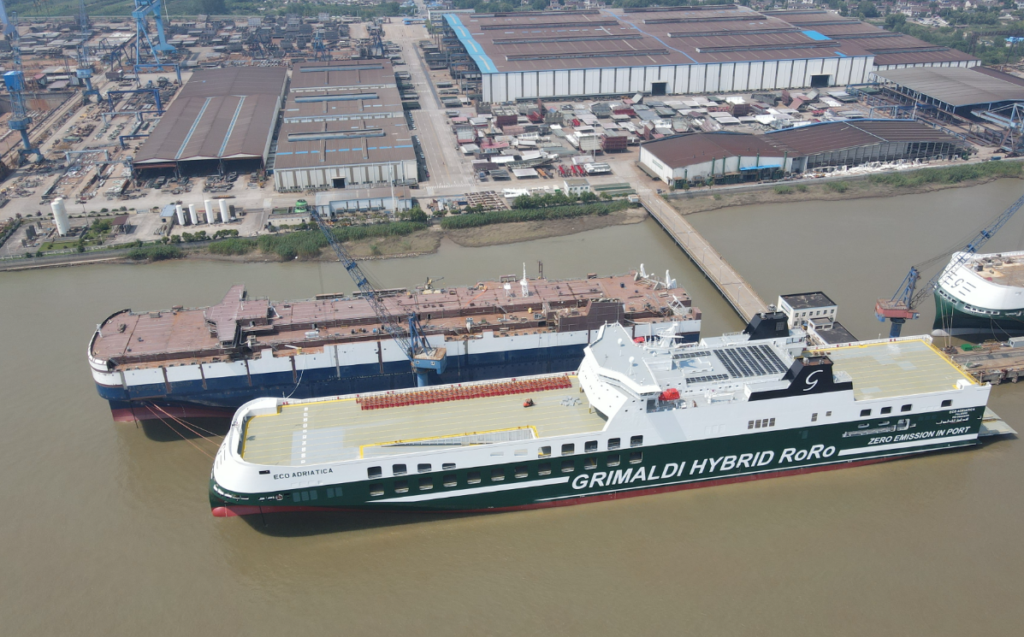