Hydrex has carried out on-site, underwater repairs and replacements on all types of seals for a number of years now. A dry environment is created underwater in which the divers can work. Several major classification societies have also awarded Hydrex certificates that accept the Hydrex revolutionary flexible mobdock technique to perform permanent underwater seal repairs which previously would have had to be done in drydock.

Every Hydrex office has a fast response center equipped with all the latest facilities, equipment and tools. These centers were designed specifically to increase speed of service. The lightweight flexible mobdocks packed in flight containers allow for a very fast mobilization and a timely arrival of Hydrex teams on any location around the world with everything they need to successfully complete the job.

Hydrex constantly invests in the research necessary to continue to evolve repair techniques and procedures. Over the years the Hydrex R&D department has constantly improved the flexible mobdock (mobile mini drydock) technique to make it possible for Hydrex diver/technicians to perform permanent repairs on seals, thrusters and any other part of the underwater vessel without the vessel needing to go to drydock. The latest generation of flexible mobdocks allows Hydrex to carry out on-site replacement of virtually any type of stern tube seals very quickly.

The following case studies give an account of some of the more important recent underwater stern tube seal repairs performed by Hydrex.

When the fore as well as the aft stern tube seals of a 247-meter tanker were leaking, the vessel was not given permission to enter any port. Unloading at sea and going to drydock seemed the only option for the vessel, until Hydrex sent a diver/technician team with one of the company’s flexible mobdocks to the ship’s location in Port Gentil, Gabon, to replace both sets of stern tube seals on-site.

The team loaded the necessary equipment on a barge on which they set up a work station to monitor all underwater activities. The barge then sailed to the tanker and the Hydrex team leader met up with the vessel’s owner and superintendent. The rest of the diving team made all remaining preparations for the main activity, which started, immediately after the meeting, with the removal of the rope guard. This was followed by a thorough underwater inspection and shaft wear down readings.

While the Hydrex flexible mobdock was installed to create a dry underwater environment around the stern tube seal assembly, Hydrex technicians replaced the fore stern tube seals which are located on the inside. Next the team started the work on the aft seals. This was done inside the flexible mobdock in drydock-like conditions, which are essential for stern tube seal repairs. The diver/technicians cleaned the entire assembly before they removed the damaged seals one by one and replaced them with new ones.

This allowed the owner to have his ship continue its schedule and enter the port to unload its cargo.

In May, Hydrex diver/technician teams carried out underwater stern tube seal repairs on a 292-meter, 50,644 grt container vessel in Singapore. The ship was suffering from an oil leak, making a fast repair necessary. Using one of the company’s flexible mobdocks the team was able to carry out the entire operation on-site and underwater, saving time and money for the owner.

After the diving team had set up a monitoring station, the operation started with a thorough underwater inspection of the stern tube seal assembly. This revealed that a fishing line had caused the leak.

After the inspection, the team detached the rope guard. The fishing lines entangled around the liner were then removed. The divers then installed the flexible mobdock around the stern tube seal assembly creating a dry underwater environment for the divers to work. The split ring was then disconnected and brought to the surface to be cleaned. After cleaning the entire assembly, the divers removed the first seal and replaced it with a new one which was then bonded. This procedure was repeated with the other two damaged seals.

Thanks to the underwater operation, the vessel could sail on with the oil leak fixed.

When a 204-meter cruise vessel suffered an oil leak in its stern tube seal assembly, Hydrex was asked to perform a permanent seal replacement. The repair was carried out with the Hydrex flexible mobdock technique and performed in stages to allow the ship to keep the tight schedule of the cruise it was on. A small Hydrex diver/technician team met up with the ship in Kusadasi, Turkey and removed the starboard side rope guard. This was done to shorten the time required for the actual replacement of the stern tube seals. It was essential in fitting the operation within the short stop the vessel made in the next harbor on its trip. The team was then completed with additional diver/technicians and sailed to Greece on board the cruise ship.

As soon as the vessel arrived in Piraeus, the Hydrex diver/technicians set up a monitoring station next to the ship and made all necessary preparations for the main part of the operation. The team then installed the Hydrex flexible mobdock around the stern tube seal assembly. This created a dry working environment underwater in which to carry out the repair in the drydock like conditions necessary when replacing seals.

After the diver/technicians had opened up the assembly they removed the damaged stern tube seals one by one and replaced them with new ones. A subsequent leakage test showed that the repair was successful. The team then closed the stern tube seal assembly again and removed the flexible mobdock. This ended the second part of the operation well in time for the cruise ship to sail to its next stop with its passengers.

In Istanbul, Turkey, the team met up with the vessel again and refitted the rope guard onto the stern tube seal assembly, concluding the operation. The ship could continue its journey free of oil leaks without going to drydock and without any changes to its schedule.

Hydrex sent diver/technician teams to perform two underwater stern tube seal repairs at the same time. One on a 143-meter general cargo ship in Galveston, Texas, U.S.A., and one on a 292-meter container vessel in Panama. Both vessels were experiencing oil leaks and a fast repair was required by the classification societies.

Both stern tube seal repairs were carried out in less than perfect conditions. There was almost no water visibility in Galveston at the time of the repair. This made the diving operations a lot more challenging than expected. In Panama the circumstances were better, but still far from ideal. This did not present any problem to the Hydrex diver/technicians. They are trained to be flexible and adapt to constantly changing working conditions. Our technical department has many years of experience in dealing with all kinds of weather circumstances in locations around the world. The combination of this theoretical knowledge and the means for a practical execution, allowed Hydrex to perform both stern tube seal repairs in these harsh circumstances. This was done under the strictest safety regulations, to the highest quality standards and without any unnecessary delay.

After the diving team had set up a monitoring station, the operation started with a thorough underwater inspection of the stern tube seal assembly. The divers then removed the rope guard.

The team then created a dry working environment around the stern tube assembly using a flexible mobdock. This is needed for any permanent stern tube seals repair. After cleaning the entire assembly, the divers disconnected the split ring and brought it to the surface to be cleaned. Next the team removed the three damaged seals one by one and replaced them with new ones.

Meanwhile, oil was leaking from the stern tube seal assembly of the second container vessel. Another team of Hydrex diver/technicians therefore mobilized to the vessel’s location in Panama, together with all the needed equipment. The diving team first set up a monitoring station. Next they started the operation with a thorough underwater inspection of the stern tube seal assembly.

The underwater inspection revealed that the rope guard was missing. Fishing lines tangled around the liner had caused the oil leak. These were removed by the diver/technicians. The team then installed the flexible mobdock around the assembly. After cleaning the entire assembly, the divers removed the first seal and replaced it with a new one which was then bonded. This procedure was repeated with the other two damaged seals.

By sending the Hydrex flexible mobdocks in our special fly away cases together with all equipment, fast response to any emergency call is guaranteed to locations around the world from the various Hydrex offices.

Off-hire causes a substantial loss of money. The teams therefore worked in shifts to perform these stern tube seal repairs within the shortest possible time frame. This saved all the owners the time and money which going to drydock would have entailed. This service requires extensive resources in terms of trained and competent personnel as well as multiple sets of all the necessary equipment. 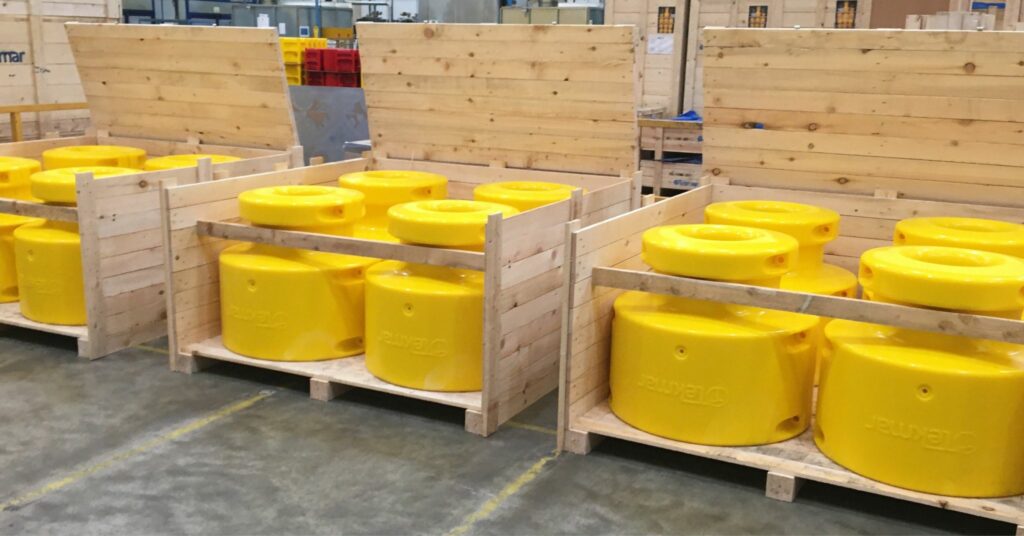