“Learn with low costs, grow with minimized risk, and keep offshore access easy in the early phase.” This recipe for success in tidal energy industry was shared with us by the Head of New Energy at Bluewater Energy Services, Mr. Allard van Hoeken.

Tidal Energy Today has interviewed Mr. Van Hoeken who was recently bestowed with the title Engineer of the Year, and was awarded the Prince Friso Engineers Award.

The main focus of the interview is the recent launch of the BlueTEC floating tidal platform off Texel island, the Netherlands.

TET: Mr. Van Hoeken, can you tell us more about the BlueTEC tidal platform performance now that it has been deployed off Texel island?

Van Hoeken: It’s a great success. The platform is already feeding electricity to the Dutch grid. What is also very special about it is that, from November when the project was still in the drawings, to April/May when it was deployed, only six months have passed. That is just amazing, and not yet seen in tidal industry. It is very good for tidal industry to know that this is possible.

It is out operating in the sea near Texel, and now the platform exists. This gives a lot of comfort to potential buyers. Apart from having a demonstration platform, we have begun measuring real wave and current forces, to compare it with our simulations and calculations, in order to improve the design basis for future platforms.

TET: Does Bluewater have plans for expanding the Texel project with additional platforms, and what insights does Bluewater, with its partners, expect to get from this first deployment?

Van Hoeken: The plans for expanding the Texel project consist of using the same platform that can be fitted with larger turbines, so actually increasing capacity on the platform itself. Maybe in the future we will extend the project with more platforms. The most important thing now is using this platform to extend it with more turbines and larger turbines, and as already mentioned, measurement and data acquisition that we’re doing to match the reality with the simulations. That really is the plan for Texel and that’s what we expect to get.

TET: Can you tell us more about the latest tidal energy generation technology Bluewater is working on?

Van Hoeken: The whole idea is that BlueTEC Texel is the demonstration platform – it is the platform that we’re offering to all parties worldwide in tidal project developments and to potential buyers.

Right now, the platform houses one Tocardo’s T1 100 kW tidal turbine. When Tocardo’s T2 turbine with estimated rated capacity of 200 KW becomes available, which will be soon, we will tow the BlueTEC platform to the Port of Den Helder and mount T2 turbine on it. We will then tow it back to Texel and reconnect it to the anchoring and mooring lines. 200 kW is the capacity we designed the platform for and is what we are offering to the market. After this, we will mount multiple Schottel Instream Turbines reaching a similar range of capacity. Then, the next step will be to mount two T2’s on it, so we will have 400 kW, or maybe 500 kW platform, depending on the current conditions.

This way, a capacity of 400-500 kW per platform will quickly be reached with existing technology.

After that, the same platform will be extended to 2 MW. For this, we will use two 1 MW turbines, from which supplier this is, will be dependent on which turbines are available on the market 2 or 3 years from now.

TET: What countries and regions do you see as promising markets for expansion in the future?

Van Hoeken: For the 200 kW platform we see remote locations worldwide as the main market. These are locations that are not grid-connected and that use diesel generators and/or solar energy, which requires space and storage capacity. With tidal energy both of these downsides are addressed – electricity is generated predictably, without taking in the space on land. That is the prime market for the 200 kW version of the BlueTEC platform.

Basically, our view is that it is great to have a big plan, and it is even smarter to start it with existing technology.

So, take a 300 MW farm in planning. First, a small corner of this farm is filled with let’s say 5-10 MW of our floating 500 kW units. This way, you start with existing technology, with low investment and with low grid requirements.

In this manner you can really achieve something with a limited amount of money and minimized risk, while you test and prove the site where you want to build a 300 MW farm.

I see that as a realistic road to get in these big farms, which are also our prime market. So, with the 500 kW version, and the following 2 MW version, we aim at tidal energy farms markets in for example the UK, France and Canada, and regions farther away such as Japan, and South Korea, where tidal energy has high potential.

With the Texel project being connected to the Dutch grid as well, how would you assess the level of support offered to tidal energy developers by the Dutch government?

Van Hoeken: I have always found the Dutch government very supportive, enthusiastic and interested. I’ve always had good feedback and communication with all levels of government, and I’m really positive about the support we got.

I’d like to add I think it is wise that the Government is supportive, because new developments always take time and money, but they lead to progress. It is essential for governments to support this.

It’s all about supporting progress, especially in the area of new energy, because new energy is clean, local and infinite.

TET: How do you think tidal energy industry will develop in the future and what measures are necessary to be taken for ensuring the industry is on the right track?

Van Hoeken: I believe that the sense of realism is kicking in. So, I think the industry will start using small and mid-sized turbines that are available now, and mid-sized units like 500 kW platforms. I believe the industry will start using devices that allow immediate access for inspection and maintenance. It is essential, which we also learned from offshore wind, that we need good access to devices. So, like the example I’ve just mentioned, using our 500 kW units to initiate farm development and use larger units later is the route I believe will be followed.

This could be summarized as: “Learn with low costs, grow with minimized risk, and keep offshore access easy in the early phase.”

TET: Is there anything else you would like to add?

Van Hoeken: The tidal industry needs to work closely together with people who understand the reality of the ocean. More realism is necessary. We all dream of  big projects with big machines. However, these clearly are taking time to develop and will offer learning at high costs. Therefore we, and several others in the industry as well, believe that starting with mid-sized units brings a reality to the industry. And as I said earlier, keep offshore access easy by using floating constructions. If the site, for some reason, is not ideal for floating, then I would say leave if for the future, and start elsewhere where floating is immediately possible. Start with something you can access easily and learn. 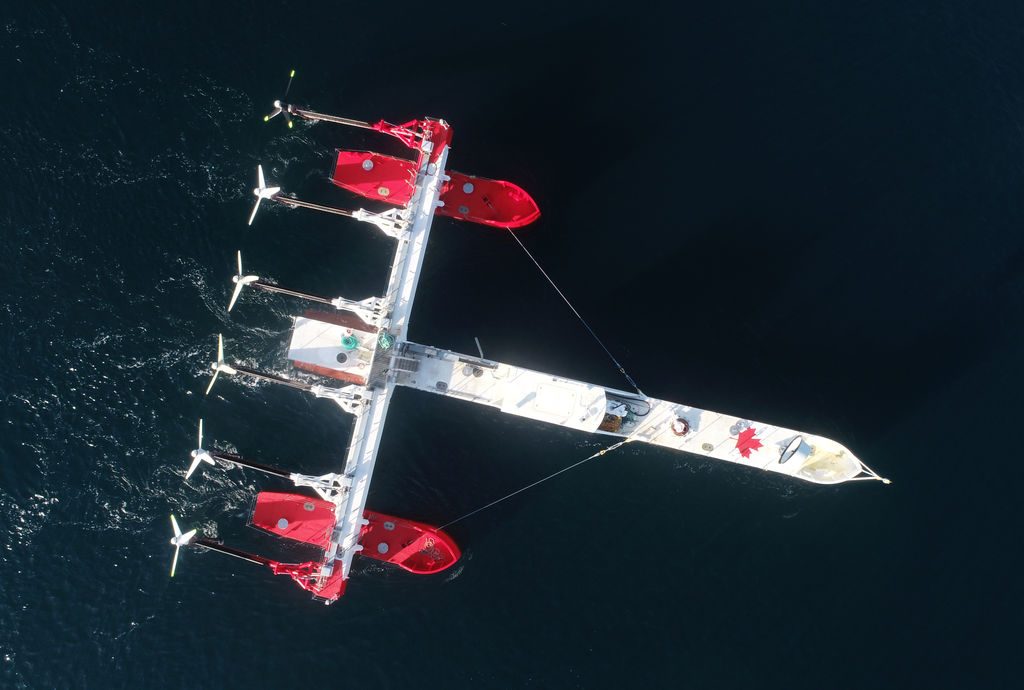