To remind, Scorpio in December 2018 took over the helm of Nordic American offshore after it bought $5 million worth of NAO shares. Scorpio then appointed Emanuele Lauro as the new CEO, and also named the new COO and added a director to the board.

NAO then on April 8 said it had agreed with lenders of the company’s $150 million Revolving Credit Facility to the extension of waivers up until January 31, 2020.

It has also announced that the lenders have committed, upon satisfaction of certain conditions, to a new $ 132.9 million term loan facility with a maturity of December 6, 2023, to refinance the credit facility which has an outstanding balance of $132.9 million.

As part of the agreements with the lenders, NAO committed to acquire thirteen vessels from Scorpio Offshore for consideration in common shares worth approximately $22.6 million in aggregate.

Chief Executive Officer said the agreement with the lenders and the vessel deal marked a new beginning for the company.

“With the shared commitment of our lenders and major shareholders, we are taking substantial action to reduce our overall leverage and provide visibility into our liquidity and our debt profile. As a result, the company gains much-needed financial and operational flexibility at a time when the offshore market is showing incipient signs of improvement,” Lauro said on Monday.

“In May we will have our entire 10 vessel PSV fleet operating and employed at rates significantly higher than those which prevailed one year ago. In the coming months we will be taking additional steps to improve our efficiency and deliver value to our shareholders, many of whom so patiently supported the Company through the recent months,” he said.

What was agreed on Monday, was completed on Thursday. NAO on Thursday said it had completed the acquisition of thirteen vessels from Scorpio Offshore Holdings Inc. for 8,126,219 common shares at $2.7774/ share.

The company which up until the transaction owned a fleet of ten platform supply vessels has now added two anchor handlers and eleven crew supplies to its fleet. See the fleet breakdown below, as shared by NAO on Thursday: 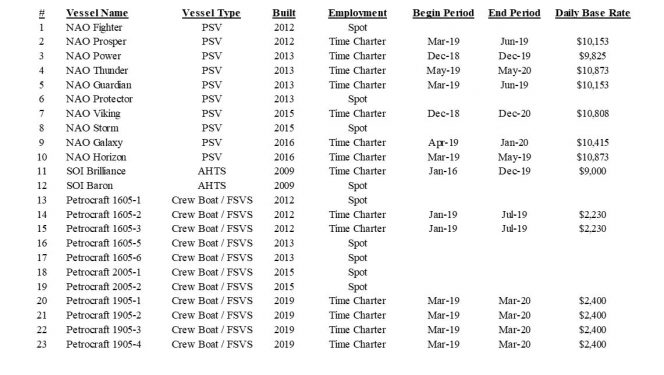 In a separate transaction, NAO has sold 3,240,418 common shares under its Equity Line of Credit to two affiliated entities which are accredited investors for $2.7774/ share.

Emanuele A. Lauro, Chairman, and Chief Executive Officer said: “With the completion of this acquisition and the first drawdown under our Equity Line, NAO has achieved critical short-term milestones of reducing our financial leverage and increasing our liquidity.  We will now turn to our immediate operational goals which include the employment of our entire North Sea fleet within the month of May.

“Our PSVs and North Sea operations will remain our primary focus.  Our Q1 results will portray a number of contracts which reflect weaker market conditions. However, our spot vessels are experiencing dramatically improved utilization and rates, in some cases exceeding $20,000/ day. We do anticipate current conditions persisting, even improving, into the summer months.

“Our Anchor Handlers and Fast Crew Boats are serving global customers in the West African market.  We are experiencing increased inquiry for our spot vessels which portends a broader improvement in offshore fundamentals beyond any single region. We look forward to providing more details during our Q1 Earnings Call next month.”