Ordered from the Jinling shipyard, the newbuild was handed over to its owner in Nanjing (China), on 4 June 2021.

Certified by Italian ship registry RINA, the units of this class have up to seven times better energy efficiency indexes when compared to the previous generation of RoRo vessels.

Just like its four sister vessels already in service, the Italian-flagged Eco Catania has a length of 238 meters, a beam of 34 meters, a gross tonnage of 67,311 tonnes and a service speed of 20.8 knots.

The loading capacity of the ship’s seven decks – two of which are hoistable – is twice that of the previous class of RoRos deployed by the Grimaldi Group on short-sea routes. The vessel can carry 7,800 linear meters of rolling freight, equivalent to around 500 trailers and 180 cars. The quarter stern ramp allows the loading of freight units weighing up to 150 tons.

Thanks to the adoption of advanced technological solutions, at the same speed the Eco Catania consumes the same amount of fuel compared to the previous generation RoRo units, and is therefore able to halve CO2 emissions per unit transported. Emissions are even cut to zero during port stays, when the Eco Catania uses the electricity stored in mega lithium batteries with a total power of 5 MWh, which are recharged during navigation thanks to shaft generators and 350 m2 of solar panels.

The vessel is also equipped with electronically controlled engines and with an exhaust gas cleaning system for the reduction of sulphur and particulate emissions.

“The Eco Catania is just the most recent of the many tangible proofs of our commitment to accelerate the ecological transition in the transport sector,” Emanuele Grimaldi, Managing Director of the Neapolitan company, pointed out.

“Sicily deserves and needs reliable and efficient transport services; this is why we have dedicated to one of its main ports our fifth GG5G-class vessel, which will soon be deployed between the island, mainland Italy and Malta“. 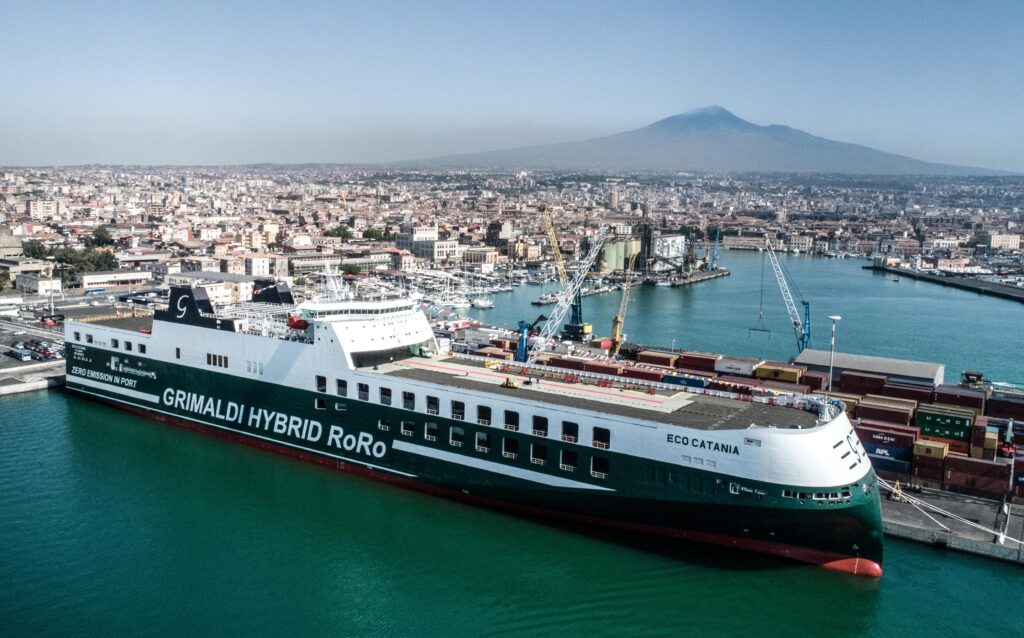