“Reuben Lasker represents a significant milestone in the agency’s efforts to provide world-class marine science platforms,” said Rear Adm. Michael S. Devany, director of the NOAA Office of Marine and Aviation Operations and the NOAA Corps. “This state-of-the-art ship will play a key role in supporting NOAA’s mission and serving the nation.”

Built at MMC’s shipyard in Marinette, Wisc., and funded through the American Recovery and Reinvestment Act, Reuben Lasker is the fifth in a series of Oscar Dyson-class ships built for the agency. The ship is equipped with the latest technology for fisheries and oceanographic research, including advanced navigation systems, acoustic sensors, and scientific sampling gear.

“MMC has a long, established history of delivering exceptionally crafted and complex vessels,” said Chuck Goddard, MMC’s president and CEO. “The talented and skilled workers of MMC are proud to deliver this high quality vessel to NOAA in support of its important mission.”

The ship is also engineered to produce much less noise than other survey vessels, allowing scientists to study fish populations and collect oceanographic data with fewer effects on fish and marine mammal behavior. The ship’s comprehensive environmental sampling capabilities will enable researchers to gather a broad suite of marine life data with unprecedented accuracy.

“The fisheries survey vessel Reuben Lasker is designed to produce so little sound that our scientists can survey marine species without disturbing the animals’ behavior or compromising the capabilities of our most sensitive acoustic equipment,” said Richard Merrick, chief scientist for NOAA Fisheries. “The vessel will support research that is essential to sustain and rebuild our nation’s marine resources.”

The ship is named after the late Dr. Reuben Lasker, a pioneering fisheries biologist who served as the director of the NOAA Southwest Fisheries Science Center’s coastal fisheries division and as adjunct professor at Scripps Institution of Oceanography, University of California San Diego. Lasker directed a renowned research group that focused on the survival and transition of young fish to adulthood, a topic with implications for fisheries management throughout the world.

NOAA plans to commission Reuben Lasker in 2014. The ship will be homeported in San Diego, Calif. The NOAA fleet of ships and aircraft is operated, managed and maintained by the NOAA Office of Marine and Aviation Operations, which includes commissioned officers of the NOAA Corps and civilian wage mariners. 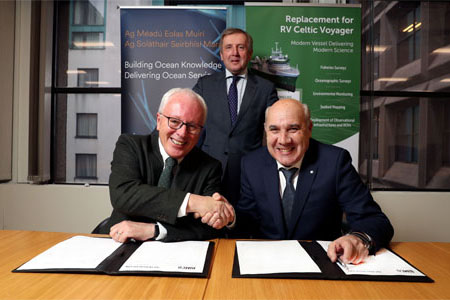