Photo: DEEC-Tecs can be built into numerous shapes, like snakes and balloons, to capture energy from a wide range of ocean environments (Illustrations by Besiki Kazaishvili, NREL)

Researchers from the National Renewable Energy Laboratory (NREL) have secured the first patent for distributed embedded energy converter technologies (DEEC-Tec), which relates specifically to the application of the technology in marine renewable energy.

DEEC-Tec, pronounced deck-tech, is a technology in which many small energy converters can be aggregated to create a single structure that could potentially make the promise of substantial renewable energy generation from ocean waves become a reality.

The invention’s first patent is specifically for applications in marine renewable energy – clean power generated from ocean and river waves, currents, and tides. But DEEC-Tec could eventually transform sources of everyday energy, including almost all physical motions or dynamic shape changes, into electricity or other forms of usable energy, according to NREL.

“The DEEC-Tec domain has legs and is growing. The patent shows that we’re gaining momentum in a fruitful area of research,” said Blake Boren, a senior engineer at NREL and the lead inventor on the patent along with Jochem Weber, chief engineer for NREL’s water power program.

DEEC-Tec might very well have the legs to move into buildings, clothing, and roads, but it is starting in the ocean.

In the DEEC-Tec domain, individual energy converters work together, like muscle cells, to create a larger structure, much like the sea snake. Most devices use one generator to convert ocean energy into usable, clean, and renewable sources of energy, including electricity. But DEEC-Tec amasses its many tiny converters to form one larger, often flexible energy converter.

“DEEC-Tec gives researchers and developers an entirely new way of thinking about how to convert marine energy from ocean waves, tides, and currents into more usable forms of energy, such as electricity,” Boren said.

For example, DEEC-Tec-based wave energy converters could look like balloons that contract and expand, snakes that undulate, or paddles that twist and bend to harness ocean wave energy, according to NREL.

These adaptable balloons, snakes, and paddles could come with big benefits, too. Flexible wave energy converters, also known as flexWECs, can harness and convert waves into usable energy throughout their entire structure. So, no matter where or how wave energy interacts with a device’s structure, energy converters will be there to transform that wave into power.

Because flexWECs do not concentrate ocean wave energy into a singular energy converter (like a lone rotary generator or hydraulic piston cylinder) or one power transmission system (like a drive shaft or gearbox), they avoid accumulating ocean wave forces that could potentially shut off or damage the machine.

Other wave energy converters often use large steel frames to protect their rigid bodies from oceanic forces, but those frames can be expensive and heavy. Instead, flexWECs can go with the flow.

FlexWECs’ frames could also enable them to harness energy from a far wider range of ocean locations and wave energy frequencies, NREL claims

“One day, there could be DEEC-Tec-based marine renewable energy farms off the coast of California, Oregon, or Washington, with these types of wave energy converters potentially powering coastal communities or the utility grid at large,” Boren said.

High costs are one of the last major hurdles that the blossoming marine energy industry must overcome to start powering those communities. And DEEC-Tec’s flexible archetypes could offer an especially cost-effective way to harness wave energy, according to NREL.

Because flexWECs host far more than one energy converter, they could require fewer maintenance trips – if only a small group of tiny converters requires fixing, all others could continue operating.

FlexWECs can also be built with more sustainable, cost-effective materials, making them easier to install and control once out in the ocean. Greater control could mean increased energy production, allowing operators to adapt to changing ocean conditions to harness the greatest amount of potential energy.

Because the DEEC-Tec domain is still relatively new, Boren and his team are working hard to explore exactly how these technologies could create a new generation of marine energy devices or other energy generating materials.

“The patent gives further credence as to what DEEC-Tec could become. Now, we have a patented foundation to further develop and promote DEEC-Tec both within NREL and with our external collaborators and industry,” Boren concluded. 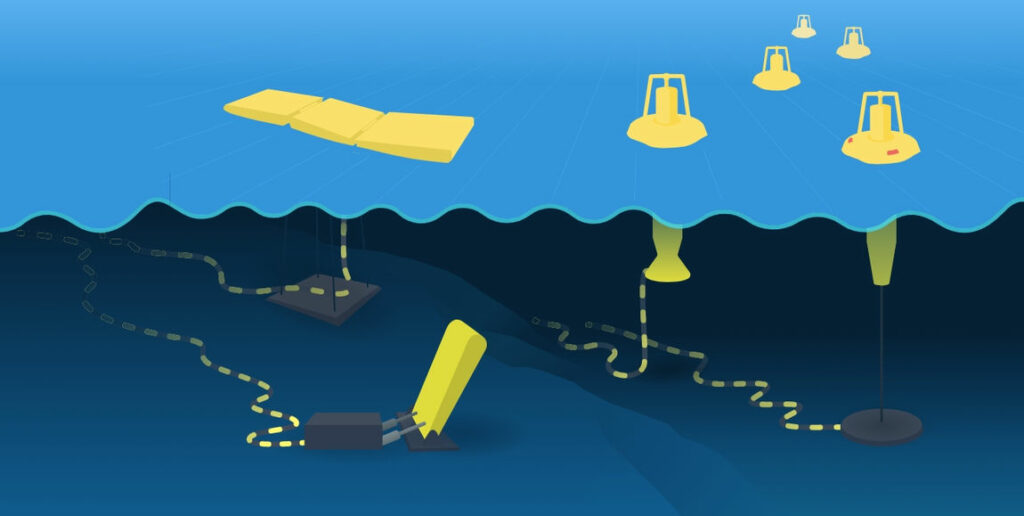