Newly launched Ocean Network Express (ONE) plans to comply with the new sulphur regulations by fueling its ships with low-sulphur compliant hybrid oil.

The company said that low sulphur fuel is the most realistic option for the company as its container vessels can easily switch to the new fuel, without requiring special technical modifications.

ONE is currently in discussions with bunker suppliers for specifications.

“Current market difference of High Sulphur Fuel Oil (HSFO) and LSGO is approximately USD 150-200 per metric ton. This gap is expected to increase after Jan 1, 2020 due to LSGO demand and this will certainly impact operational cost,” the company said.

ONE added it will start complying with the regulation before the effective date kicks in as it takes several months to transit from non-compliant fuel.

ONE delivered a net loss of USD 120 million in the second quarter of 2018, caused by operational teething problems, and higher bunker price than originally forecast.

The Japanese JV further lowered its forecast for the business performance for the first half of the fiscal year by USD 40 million.

Commenting on the other available options for compliance, ONE said that since building a new scrubber-fitted  vessel may take 2-3 years upon order confirmation, scrubber installation was not the way to go. However, the company will consider installing the systems on future newbuilds.

“ONE is also evaluating to charter vessels with scrubber system to expand the number of compliant vessels in the fleet,” the company further noted.

As for the LNG, due to the construction length of an LNG-powered vessel and current constraints on availability of LNG bunkering facilities, adoption of this option was not a viable solution.

“Although our LNG powered vessel deployment plan is not concrete at this moment, evaluation is underway where development of LNG bunkering environment is being further analysed,” the company added. 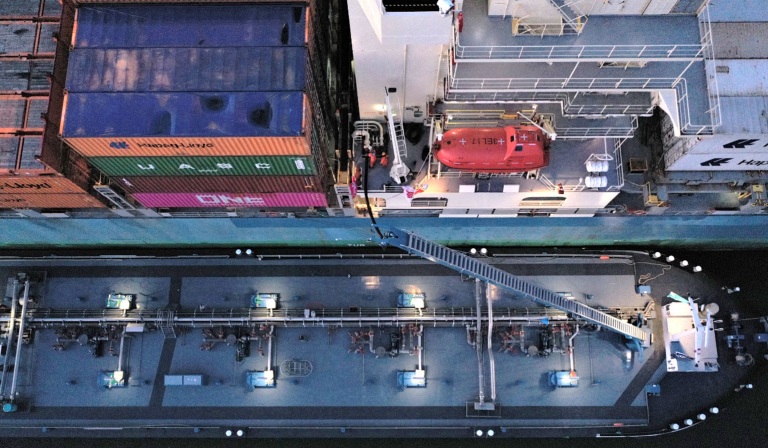