Palfinger Dreggen Supplies Cranes for 7 Drillships and One Platform

Palfinger Dreggen AS has been awarded a contract for the delivery of 28 cranes to Sembcorp Marine’s subsidiary Jurong Shipyard Pte. Ltd.

The contract includes the supply of cranes for a total of seven drillships to Sete Brasil, scheduled for delivery between 2014 and 2017.

Palfinger Dreggen AS has also signed a contract with Technip for the delivery of two complex offshore cranes to a new platform which will be delivered to DONG for operation on the Danish Hejre field.

Palfinger’s delivery to Jurong Shipyard Pte. Ltd. will make use of the existing cooperation with the Brazilian company Koch Metalúrgica S.A. and will consist of cranes for seven drillship sets. Each vessel is to be equipped with two DKF2000 Pedestal Knuckle Boom Cranes and two DKW2000 Pedestal Wireluffing Cranes. The Knuckle Boom Cranes have a capacity of 85 tons and the Wireluffing Cranes a capacity of 63 tons. All seven drillships will be built at Sembcorp Marine’s new Brazilian shipyard Estaleiro Jurong Aracruz Ltd. and based on the Jurong Espadon design. The Espadon drillships will be built to cater to the oil and gas discoveries in the giant offshore pre-salt fields of the Santos Basin. They will be capable of operating at water depths of 10,000 feet (3.05 km) and drilling at depths of 40,000 feet (12.2 km). Due to its size and value, this contract represents not only a milestone for Palfinger Dreggen AS and Koch Metalúrgica S.A. but also for the entire PALFINGER group. 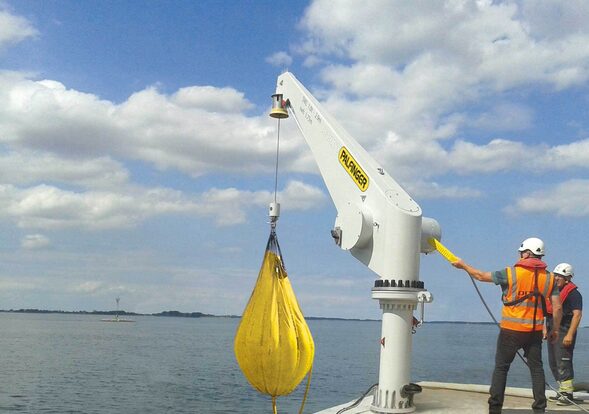