Back to overview
Home Fossil Energy Protesting against oil, Greenpeace activist drops out of sky during EURO 2020, injures several people

Several people were injured on Tuesday after a Greenpeace activist, protesting against oil, parachuted into the Allianz Arena in Munich before a football match between Germany and France in the European Championship (EURO 2020).

Ahead of the European Championship game in Munich on Tuesday 15 June 2021, Greenpeace staged a protest against the sponsor Volkswagen, demanding more speed when phasing out climate-damaging internal combustion engines.

The slogan “Kick Out Oil” was written on the paraglider, which landed on the field shortly before kick-off. The one-meter high latex ball that floated through the stadium roof to the centre circle had the same slogan.

“For millions of people, football is not only extremely important during the European Championship, but it will become less and less possible to play on an increasingly hot planet”, said Greenpeace traffic expert Benjamin Stephan.

“If VW continues to sell climate-damaging diesel and gasoline vehicles as planned by at least 2040 million, the group will continue to fuel the climate crisis ruthlessly. Instead of green PR, Volkswagen urgently needs an exit date”.

According to Greenpeace, in contrast to manufacturers such as General Motors, Volvo or Fiat, Volkswagen has so far refused to give a fixed end-date for cars with internal combustion engines.

The environmental organization also said that, if global temperatures continued to rise due to the burning of fossil fuels such as oil, this would also have a medium-term impact on popular football.

However, things did not go as planned for Greenpeace and the parachutist who, instead of flying over the stadium and dropping the latex ball, had to land instead, injuring several people in the process.

Following the incident, Greenpeace spokesman, Benjamin Stephan, said: “We apologize that this demonstration did not go as planned and that someone was apparently injured. That was never our intention. The paraglider should fly over the stadium and drop a latex ball with a message of protest onto the field. Technical difficulties led to the fact that the pilot was forced to land in the stadium. We deeply regret that this put people in danger and apparently injured them”.

Reuters reported on Tuesday that several people were being treated in hospital for injuries caused by the protestor.

“This inconsiderate act — which could have had very serious consequences for a huge number of people attending — caused injuries to several people attending the game who are now in hospital and law authorities will take the necessary action”, UEFA said in a statement quoted by Reuters.

In related news, Greenpeace activists earlier this year also staged a protest at the headquarters of the European Central Bank (ECB) in Frankfurt, Germany due to the bank’s support of fossil fuels companies.

Greenpeace said the protest came in the wake of a new report revealing how the rules governing which assets private banks can provide to the ECB as collateral when borrowing money favour fossil fuel companies. 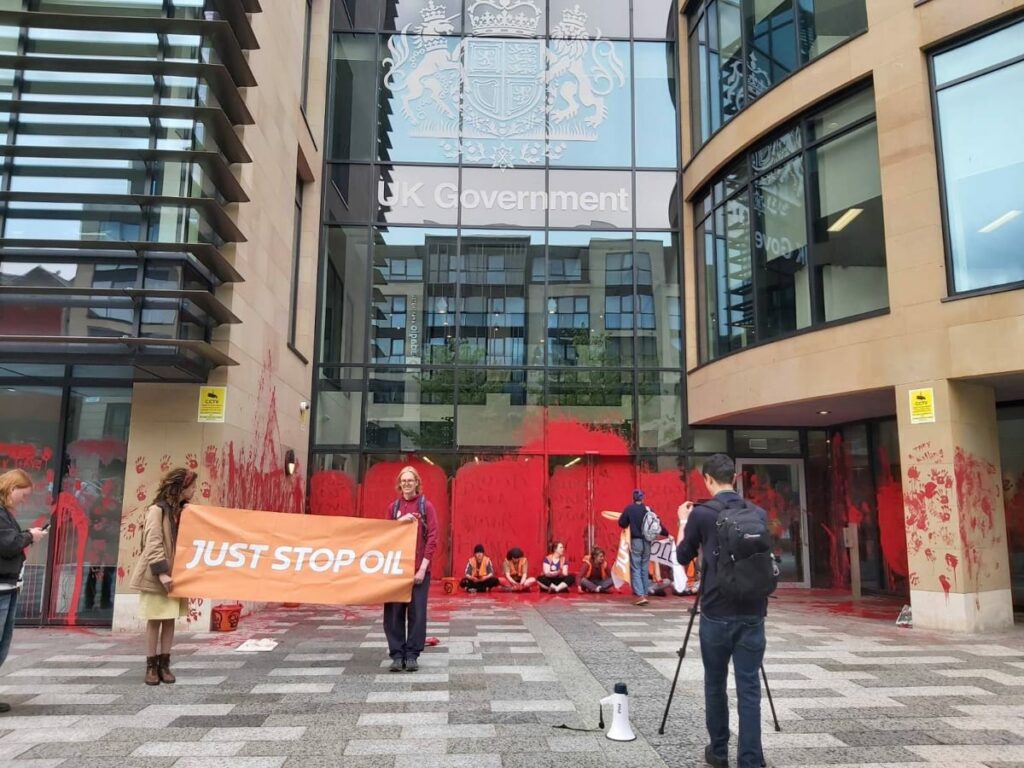