Prysmian has entered into a Limited Notice to Proceed (LNTP) for the supply of power cables for what is said to be the first-of-its-kind high-voltage, direct current (HVDC-VSC) subsea power transmission system in the Middle East.

Prysmian received the €220 million LNTP from Samsung C&T as part of its EPC consortium with Jan De Nul.

The project comprises both a subsea route of 124 kilometers of submarine HVDC cables to be installed at a water depth of up to 35 meters and a land route of 3.5 kilometers of HVDC land cables.

Under the LNTP, Prysmian will perform engineering works, secure manufacturing capacity, proceed with partial production of the HVDC cables in advance of the full contract award and Notice to Proceed (NTP), scheduled for the third quarter of 2022, and remains subject to Samsung C&T receiving its related NTP under the main EPC contract.

The submarine fiber optical cables will be produced at the Nordenham plant in Germany, while Prysmian will use its in-house asset management and electronics portfolio to supply a range of cable monitoring solutions.

TAQA and ADNOC revealed the $3.6 billion strategic project on 22 December, stating that the aim is to significantly decarbonize ADNOC’s offshore production operations, in a push to strengthen their position in driving sustainability efforts and support the United Arab Emirates’ Net-Zero by 2050 Strategic Initiative.

Swiss company Hitachi Energy will supply four converter stations, which convert AC power to DC for transmission in the subsea cable and then reconvert it to AC from DC for use in the offshore power systems.

Construction is expected to begin this year, with commercial operation starting in 2025. 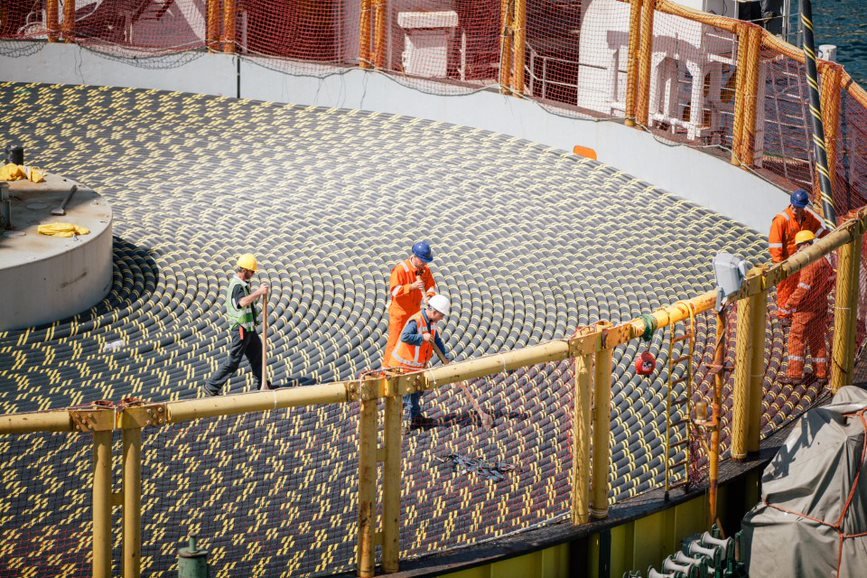