Sabella has retrieved its D10-1000 turbine in the Fromveur Passage for a short maintenance operation.

Prior to the retrieval, the subsea cable exporting the electricity to Ushant Island grid had been disconnected from the turbine.

The operations were successfully carried out by Inyanga Maritime, with whom Sabella has been working for a long time, onboard the Norwegian ship Olympic Zeus.

This vessel was chartered at the end of March in the Bay of Biscay to participate in the cleaning operation following the sinking of the Grande America. Sabella took advantage of the presence of this vessel in French waters and seized the opportunity.

After a very satisfactory operating period of the tidal turbine following its redeployment in October 2018, as part of the European ICE project led by Bretagne Développement Innovation and its partners, and a continuous electricity production over several months at the end of last year, Sabella’s team focused on testing new control methods at the beginning of 2019 in order to improve the efficiency of the turbine and contribute to the competitiveness of this emerging sector.

In parallel, a defect was detected in the nacelle’s cooling system that allows the various components integrated into the nacelle to be cooled. This defect did not prevent the operation of the turbine but limited its operating conditions due to the possible rise in temperature of the components, which could cause greater damage on the electrical chain, Sabella explained.

The servicing period, of approximately three months at the port of Brest, should resolve the problem encountered, review the condition of the components after these six months of immersion and conduct a full inspection.

The turbine will be redeployed on its foundation and connected to Ushant Island grid at the beginning of the summer, for operation until 2021 and the commissioning of the PHARES project, led by AKUO Energy, including two Sabella tidal turbines, a wind turbine, solar energy and energy storage. 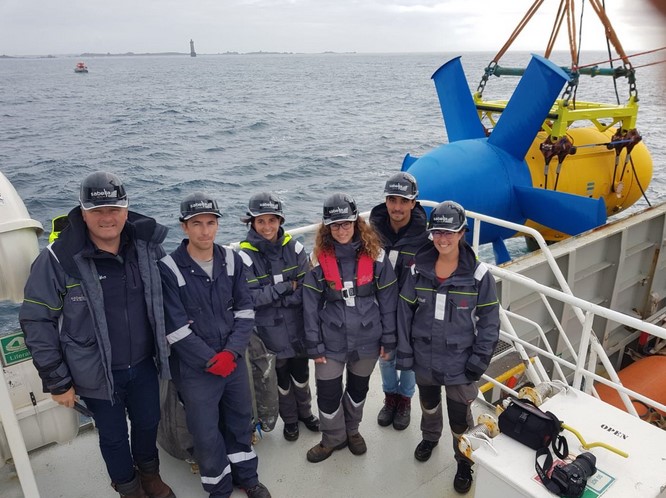