An inspection team has boarded fire-stricken X-Press Pearl earlier today in a renewed attempt to make a line connection on the bow and tow the vessel away from the coastline.

The fire, which has ravaged the vessel, has finally been extinguished after an extensive firefighting operation lasting for almost two weeks, X-Press Feeders, the operator of the containership, said citing reports from its salvors Smit Salvage.

As disclosed, there are no visible flames aboard the vessel, though smoke is still emitting intermittently from cargo holds 1,2, and 3.

The fire was reported on the ship’s deck on May 21 while the ship was at anchor off Colombo Port, Sri Lanka. The fire is believed to have originated from a container that was leaking nitric acid. The container exploded on the following day, causing a massive fire to spread across the ship and its cargo.

Salvors managed to board the ship on Tuesday afternoon, only to determine that the engine room was flooded as a result of firefighting efforts. Hence, there is a risk of the vessel sinking and causing an oil spill.

“There are concerns over the amount of water in the hull and its effect on the ship’s stability. Efforts to make a connection for towing failed after several attempts due to the tug’s movement caused by the swell. The operation was aborted for safety reasons,” the company said.

Another attempt to tow the vessel in a westerly direction is being made with support from the Sri Lankan Navy and Indian coastguard, who remain on scene. Navy representatives have boarded the vessel to assist the efforts to set up the tow.

X-Press Feeders said earlier that the hull of the vessel was structurally intact, together with the ship’s bunker tanks, adding that there has been no loss of oil into the water.

Namely, there are 300,000 metric tons of fuel in the vessel’s tanks, which could spill into the sea should the ship’s bunker tanks become damaged. Furthermore, the ship’s cargo poses a major threat of environmental pollution to the area, as the vessel is carrying 1,486 containers with 25 tons of Nitric Acid, several other chemicals, and cosmetics.

Containers and other debris which fell from the ship have been washing ashore for days and efforts have been underway to clean the beaches. A considerable number of pallets with chemicals are believed to have ended up in the sea causing massive damage to the marine environment in the area.

“The tragic fire on X-Press Pearl is a sad reminder of how important it is that shippers and packers follow the CTU Code, safely packing all products for shipment,” the World Shipping Council said in a comment.

Meanwhile, most of the evacuated crew continue to serve out quarantine at dedicated local hotels.

“Select seafarers continue helping local police with their enquiries into the fire and are cooperating with investigators. We will respect this process and not publicly discuss operational details until the investigation has been completed,” X-Press Feeders informed.

According to local media, these include the Captain, Chief Engineer, and the Second Chief Engineer of the ship, who have been banned from leaving Sri Lanka as investigations are continuing.

The reports indicate that a 10-member team of detectives was established to look into the incident. 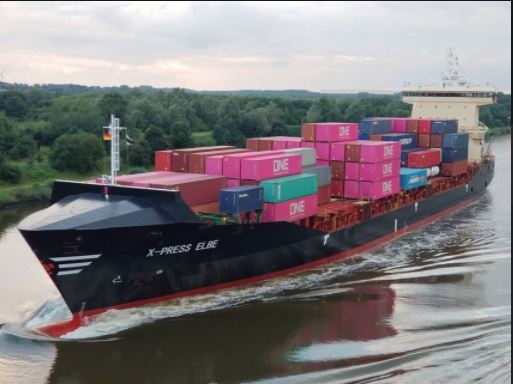