The christening ceremony took place at the Reventlou Bridge in Kiel on 22 August 2022.

The new ferry with climate-friendly propulsion is scheduled to start regular service in early September, according to SFK Kiel.

Built by Dutch ship designer and builder Holland Shipyards Group, the Wellingdorf measures 24,70 by 7,20 meters and is a sister vessel of Düsternbrook, which was delivered in 2021.

The construction costs amounted to nearly €3.2 million ($3.18 million). The procurement of the ship was funded by Germany’s Federal Ministry of Transport and Digital Infrastructure (BMDV) with about €480k as part of the Clean Air program.

The vessel is completely emission-free and entirely powered by battery power with an installed capacity of 1092 kWh. Besides the battery pack, the vessel has 20 solar panels on the roof to provide the onboard power supply network.

Almost all ferries referred to as ‘fully electric’ still have backup power provided by a diesel engine. However, the Wellingdorf has no such backup and gets redundancies from the split battery system. This means that the ferry propulsion really is all-electric.

A noteworthy system on board the ferry is the non-conventional automated mooring system which features electric-hydraulically operated mooring hooks on both sides of the ship. The mooring system is easily controlled from the wheelhouse by the captain. While moored, no power has to be directed to the propulsion system, resulting in a reduction in energy consumption.

With the new electric and hybrid vessels, SFK is renewing its current fleet.

The replacement of the fleet is said to be in line in line with the environmental goals set by SFK and the City of Kiel.

The City of Kiel aims to be CO₂ neutral by 2050 and expects shipping to play a major part in this shift. Replacing the fleet is the essential step to reach the ambitious target.

“In the state capital of Kiel, mobility and climate protection are closely linked. In order to become an emission-free city as quickly as possible, public transport must be reorganized. This also includes the increased integration of transport traffic,” Lord Mayor Ulf Kampfer said.

“The MS Wellingdorf is a great asset in the reorientation of our ferry traffic towards electric and hybrid systems. In addition, the use of the second e-ferry can make it easier for the people of Kiel to switch to bicycles on the way between the banks.” 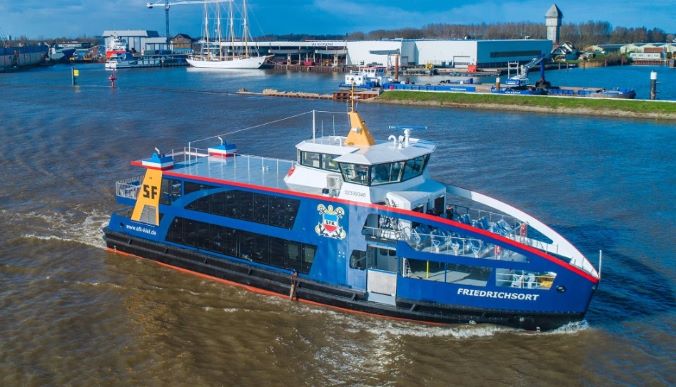