Photo: Cable being prepared for connection to PLAT-I device (Courtesy of Sustainable Marine)

The landmark achievement follows several months of intense activity in the Bay of Fundy by Sustainable Marine’s Canadian, British and German team, supported by an international network of supply chain partners.

After laying a 1 km underwater cable in late January, the firm subsequently connected its PLAT-I 6.4 tidal energy system to a purpose-built substation, located on the shores of Grand Passage.

Final inspections were conducted by Canada’s QPS Evaluation Services, who issued the SPE 1000 Field Approval – which enables the tidal platform to supply power to the grid under a demonstration permit issued by the Province of Nova Scotia.

Energization is expected in the coming weeks, according to the Sustainable Marine.

Jason Hayman, the company’s CEO, said: “Harnessing the huge potential of in-stream tidal energy in the Bay of Fundy has long been considered a moonshot, but we’re now firmly on the launchpad and ready for lift-off.

“It’s taken many years of testing, development and demonstration to refine the technology and understand how best to capture and convert tidal energy. But the moment has now arrived.

“Sustainable Marine’s next-gen platform is grid-connected and set to energize. We are grateful to all partners who have contributed to this immense international effort, and to the many stakeholders across Nova Scotia who are supporting our mission to provide a greener, cleaner and healthier future for island and coastal communities.”

As Sustainable Marine bids to become the first floating tidal energy developer to power homes, businesses and industry across the east Atlantic seaboard, Nova Scotia has doubled-down on its net-zero commitments, accelerating the phase-out of coal-fired electricity by ten years, to 2030.

PLAT-I 6.4 will eventually be relocated to the Fundy Ocean Research Centre for Energy (FORCE) demonstration site in the Minas Passage and form part of the world’s first floating tidal energy array, in the ‘Pempa’q Project’.

The system provides live-streamed data to record marine life in the vicinity of the platform. The aim is to demonstrate that a monitoring system can work in these highly energetic environments when visibility is reduced, such as during hours of darkness, or in turbid waters.

Its modular design and retractable turbines, which rise above water level, allow for easy on-site access, and maintenance, and can be easily upgraded as this rapidly growing sector develops. Meanwhile, the streamlined structure is securely moored in the channel with plenty of space around it to facilitate the unrestricted passage of marine life and vessels.

Sustainable Marine initially developed and tested the technology in Scotland, and is continuing to invest in local capacity building and knowledge transfer.

The Tidal Pioneer’s advanced capabilities, including dynamic positioning and a 4-point mooring system significantly mitigates the challenges working in strong tidal streams, according to Sustainable Marine, allowing the vessel to remain moored on site throughout the tidal cycle, while it performs a wide range of tasks including mooring and cable installation and connections using its two cranes and extensive suite of deck hardware. 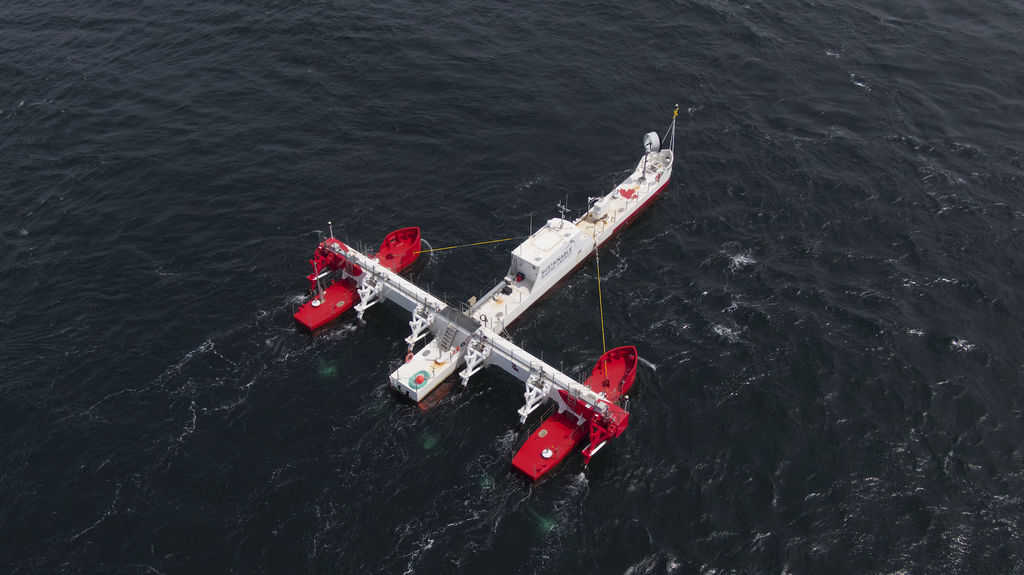