As informed, the installation was performed at the Neptune Shipyard in Hardinxveld-Giessendam, near Rotterdam. The work was undertaken at the same time as the vessel was having its air lubrication system upgraded.

Classification society RINA has followed the design approval and the supervision of the installation of the retractable wing sails on an 88-meter long vessel. The TwinFoils are supplied by Netherlands-based eConowind and the units are both integrated into a specially designed aluminum Flatrack from which the folding TwinFoil’s can be deployed. It is a wing with a flap principle similar to those used by aircraft during landing and take-off and can be folded up and down as needed.

“With this installation operating in both river and North Sea routing with varying winds we are eager to see how the rigs perform, especially with the unique combination of this self-adjusting technology in combination with a modern diesel-electric drive”, said Frank Nieuwenhuis, CEO of eConowind.

Designed and built at Dutch Shipyard De Kaap in 2012, the M/V Tharsis is a unique vessel of this type. Its innovative diesel-electric propulsion system along with the air lubrication system already reduces the vessel’s carbon footprint while with a ballast air draft of 6 meters and a minimal sailing draft of 1.65 meters it can go where most other seagoing ships can’t go, according to the company.

“Tharsis Sea-River Shipping was one of the first companies to install a diesel-electric propulsion train on its general cargo vessel with the aim of fuel and emission reduction back in 2012. After installation of a hull air lubrication system in 2020 the installation of the Econowind Twinfoil system is a logical next step towards the companies aim of becoming zero emission,” stated Jan Albert Bosma, co-owner of Tharsis Sea-River Shipping.

Wind-assisted propulsion is gaining attention in the recent period, as the maritime industry’s quest for the best possible decarbonization solutions has intensified. There are currently 30,000 ships in operation worldwide that could be equipped with wind-assisted ship propulsion technology, Jukka Kuuskoski, Chief Sales Officer (CSO) at Norsepower Oy Ltd, estimated. 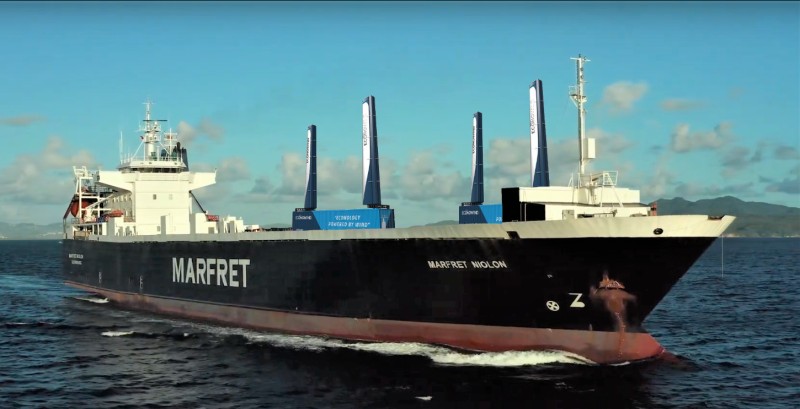