Equipment orders, software programming and initial construction have forged ahead at APM Terminals’ new 2.7 million TEU annual throughput capacity terminal with a brief presentation and inspection tour held today on land recently reclaimed from the sea at the Maasvlakte 2 site at the Port of Rotterdam. Construction is scheduled to be completed in 2014 with operations set to begin in November of that year.

“The era of commercial containerized cargo transportation began here at the port of Rotterdam in May 1966, 46 years ago, and so it is only fitting that the newest era in container handling and technology will start here as well in what will be the world’s most advanced and environmentally sustainable container terminal operation” said APM Terminals CEO Kim Fejfer, speaking to the approximately 100 invited guests attending the presentation.

The Maasvlakte II facility will be capable of handling the world’s largest containerships, and will support the existing APM Terminals Rotterdam terminal, one of the largest in Europe, with an annual capacity of 3.4 million TEUs. APM Terminals Maasvlakte II will feature an on-dock rail terminal, with four tracks when opened in 2014 and eight tracks when fully built out, and will make extensive use of Europe’s river barge network for ease of access to inland points and reduction of truck traffic as part of APM Terminals’ commitment to environmental sustainability, and in compliance with the Port of Rotterdam’s requirements to increase non-road intermodal container transportation.

APM Terminals has also signed contracts with Dutch building firm Boele & Van Eesteren for the construction of Maasvlakte II’s main office and workshop, with the intention of qualifying for BREEAM (Building Research Establishment Environmental Assessment Method) certification for environmental performance, as adopted by the Dutch Green Building Council. Contracts will soon be announced with Navis and TBA Netherlands for the development of the advanced Terminal Operating and Equipment Control software systems – both key components of the high productivity standards which have been designed into the terminal.

The use of electrification of all equipment and green energy generated power will enable APM Terminals’ Maasvlakte II facility to be free of all CO2, NOx and particulate emissions. Earlier in 2009, APM Terminals Rotterdam’s Maasvlakte I facility became the world’s first container terminal to be powered by wind-generated “green” electricity.

“Through the use of automation and new technologies, as exemplified here, including such innovations as battery-powered Lift-AGVs, we are creating a new era in ports that will increase efficiency” noted Mr. Fejfer, adding “today the future of the port industry begins right here”.

Timeline for next steps in project (phase A):

Phase A when opening in November 2014: 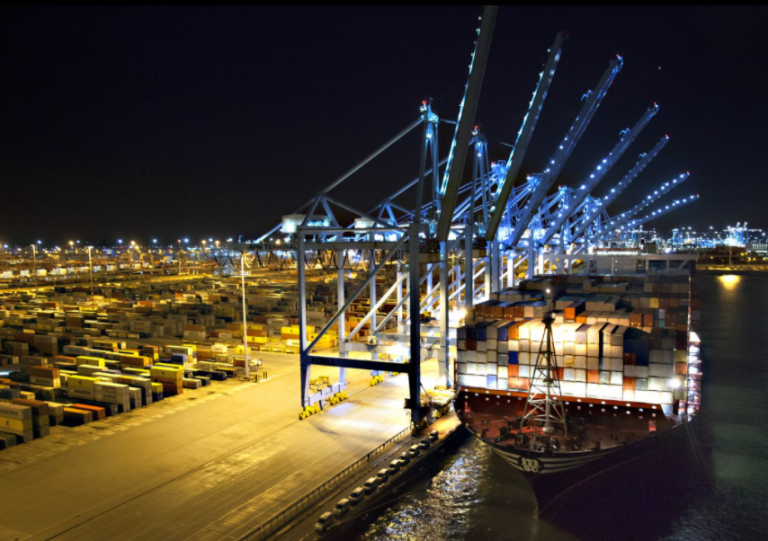