During this year’s traditional and well attended “Heering Party” in Rotterdam on Wednesday June 6th, KOTUG performed the official and spectacular launch ceremony of the RT Adriaan into the E-KOTUG.

The Stook place by Mrs Alexandra van Huffelen, vice-mayor for Sustainability of the City of Rotterdam.

Quote Mrs. Alexandra van Huffelen: “I am incredibly proud that Rotterdam entrepreneurs like Mr. Ard-Jan Kooren together with us, are willing to pick up the challenge, to transform Rotterdam into a clean, green and healthy city. With the E-KOTUG RT Adriaan, Rotterdam is the proud owner of the first hybrid tugboat in Europe. I therefore congratulate all KOTUG staff very much with this great milestone.”

Backed by years of experience and knowledge, international maritime service provider KOTUG has built its reputation as an innovative player. KOTUG and its workforce have adopted an active Go Green policy. KOTUG has embraced the dual challenges of sustainability and innovation, and have incorporated these values into its business strategies. The most visible evidence of our green credentials are voluntary sulphur free bunker fuels, the “green passport” issued for our tug materials, washable filters, LED lighting on board, shore-power in port and, last but not least, we have also won the “Inland Shipping Fuel Saving Competition”– an initiative of the Dutch Government. With its E-KOTUG, KOTUG demonstrates its ongoing commitment to the environment and emissions reduction.

Moving ahead with Green Energy

The development of a hybrid Rotor®Tug presented KOTUG’s green policy with a new challenge. In partnership with AKA in Canada, supplier of the Xeropoint Hybrid Propulsion System, an extremely eco friendly, fuel-saving tugboat was developed. One of the newest Rotor®Tugs, “RT Adriaan” was retrofitted with this system with which the electric motors, diesel engines, generators and powerful energy dense lithium polymer batteries will be controlled. This results in very efficient and eco friendly sailing with optimizing working conditions for the crew and minimizing the environmental impact without compromising a high level of performance.

After its proven and classified conversion in February 2012, RT Adriaan is Europe’s first Hybrid Rotor®Tug to rejoin the KOTUG fleet and provides green assistance for customers in the Port of Rotterdam. KOTUG emphazises that the hybrid option is the best solution for harbour tugboats serving clients and harbours who have been looking to minimize emissions and at the same time providing economic advantages.

In April last the E-KOTUG was nominated for “Clean Shipping” of the Seatrade Awards.

REDUCED EMISSIONS OF CO2, NOX AND PM: With Xeropoint Hybrid technology, engines run at or near best efficiency- and only when needed. Lower fuel usage and cleaner combustion contribute to reducing harmful emissions.

IMPROVED FUEL ECONOMY: The main engines of Rotor®Tugs are designed for a high output. Because Hybrid technology divides the propulsion load between diesel and electrical sources, it means no unnecessary idling of diesel engines.

NOISE REDUCTION: For standby or for low power operations, electrical energy storage permits the vessel to be operated in noiseless zero emissions mode, with no diesel engines running.

HEALTHY WORKPLACE: Hybrid technology allows main engines to be shut down during transit. Fast switching from hybrid modes with electrical motors to conventional modes with diesel engines is possible. For low power operations E-KOTUG is operable on battery power alone. 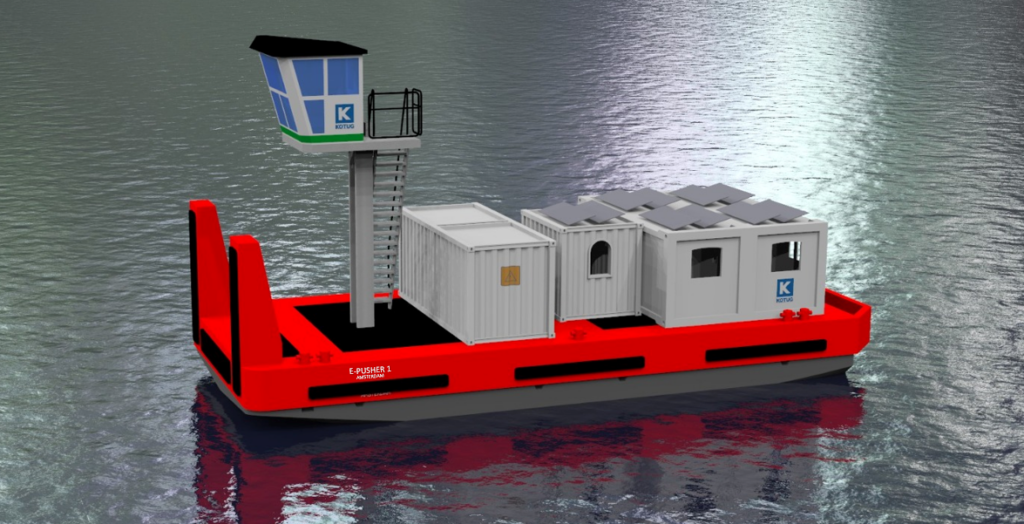