The most extensive science and engineering research project to take place in Caithness for many years is occurring this month (September, 2014) from a base at Gills Harbour, on the shores of the ‘s Inner Sound.

Expensive high-tech equipment, under the TIME initiative, has been laid on the Sound’s seabed from the 25-metre-long ‘multi-cat’ vessel Orcadia for the 28 day-long task, which is being managed by The Carbon Trust, the UK Government-supported body that, amongst other things, helps to develop and deploy ‘low carbon technologies’.

Recently-created buoy-mounted measuring devices from Rockland Scientific International of Victoria, BC, on Canada’s Pacific Coast, will measure natural seawater ‘turbulence’ in a broadly middle depth in the Sound’s 35 metre-deep water-column.

TIME is an acronym for ‘Turbulence in Marine Environments’ and the Nemo buoy has been devised with the aim of ‘holding steady’ in fast tide-streams, a key feature of locations such as the Inner Sound, that would normally force regular floats or buoys downwards towards the seabed.

There will be three sophisticated Acoustic Doppler Current Profilers, (ADCPs) held in stainless-steel cages on the seabed, which will measure current strengths at various layers in the fast-moving water-columns, as well as wave-heights on the sea-surface.

He has three Canadian technicians amongst his deployment group on the 250-tonne Orcadia, owned by ScotMarine Ltd, a company headed by ‘marine renewables’ entrepreneur Mr Barry Johnston of Stromness, Orkney Islands.

They are ABP Marine Environmental Research Ltd (ABPmer), of Southampton, that has been ‘supporting offshore renewables with technical & scientific research for a decade’; Ocean Array Systems Ltd, of Cambridge, that has devised software programmes ‘to characterise and simulate turbulence’ and apply those to the vicinity of actual devices, such as sub-sea tidal turbines; and IT Power Ltd, the pioneering Bristol-based consultancy famous in the nascent industry for playing a key role in conceiving marine current electricity-generating devices for over two decades.

IT Power was founded in the 1980s by engineer Peter Fraenkel, who was awarded an MBE last year for his work that included the world’s first electricity-generating turbine proven at the Corran Narrows, in Argyll’s Firth of Lorne in the mid-1990s and went on the create the ground-breaking Marine Current Turbines company behind the first commercial-scale tidal turbine that has been generating since the mid-2000s at Strangford Lough, a sea-inlet in Northern Ireland.

The aim of the ground-breaking science-based project is to increase understanding of turbulence in ‘high-flow’ channels, such as in the Inner Sound. The practical research, that is receiving UK taxpayers’ money via the Scottish Government’s ‘Marine Renewables Commercialisation Fund, will last for the 28-day lifetime of the powering ‘lithium ion’ batteries.

Partrac Ltd’s technical director Dr Kevin Black says: ‘The whole team’s motivation is to consider turbulence and this comes from our belief that there is currently a poor understanding and lack of data about this phenomenon, with few UK or international guidelines on the subject. We believe that, unless substantially solved, this can inhibit the development of a viable tidal stream industry’.

Mr Simon Robertson, now the Technology Acceleration Manager at The Carbon Trust’s Edinburgh office, knows the area well, including several of community-owned Gills Harbour Ltd’s directors. He previously worked for German-owned RWE n-Power Renewables, that was one of the 12 unsuccessful bidders in 2010 for the Crown Estate seabed ‘franchise’ of the Inner Sound seabed.

He says: ‘This important work will feed directly into helping tidal-project developers in what is a is a challenging factor where turbulence is a key factor’.

Turbulence is an unseen, but powerful, underwater force that can affect the longevity of components used to make up marine turbines and adversely affect their electricity yields.

This is only the second time in UK waters that the TIME research devices have been operated and those are expected to ‘generate’ literally tens of thousands of computer data measurements.

The study is not directly linked to the £51 million Meygen Ltd project in waters between one and 1.5 miles off Gills Harbour-mouth. But the ‘turbulence’ measuring devices will be placed at the expected height of the MeyGen Ltd turbines’ hubs above the seabed.

This will be in a similar manner as was done earlier this year (2014) in the more sheltered Sound of Islay, where Scottish Power Renewables plans a demonstration tidal array, prior to developing its Ness of Duncansby site, c. four miles East from Gills Habour.

Mr Bill Mowat, chairman of Gills Harbour Ltd, that belongs to the people of Canisbay, said: ‘This is an extremely important subject and we are proud to be hosting this study here.’

Mr Mowat, himself a Fellow of the Energy Institute added: ‘We here have known about turbulence in the Inner Sound and elsewhere in the Firth for many years. It is extremely difficult to measure accurately because it usually occurs in the midst of the water column.

‘We have congratulated those involved in this very commendable project, but some of us would have rather seen it continue over the whole of the coming winter, to maximise the data collected in different conditions.

‘But hopefully there will be enough data information arising, if sea and wind conditions are as variable as they regularly are in September, to allow for worthwhile predictions of turbulence to be made in future Clearly two entire ‘springs & neaps’ sequences are being covered and the equinoctial tide-streams are typically amongst the fastest of any year’.

The major Merry Men of Mey tide-race, where breaking water occurs daily year-round on the West-flowing ebbs, lies c, 1.5 miles West of Gills Harbour. When opposed by the prevailing strong Westerly winds, crashing swells there come in from many different directions.

But it is not generally known if this multi-directional feature also applies to turbulence in the water-column during the east-flowing flood-tide cycle, when Atlantic-origin swells are partially driven-in to the Inner Sound.

Orcadia’s owner Mr Johnston is also the founder of ScotRenewables Tidal Power Ltd, of Stromness. Its 250 MW floating prototype turbine was extensively overhauled and up-dated by Caithness engineers at Scrabster earlier this year.

It is now creating the SR 2000, a 2 MW full-scale demonstrator and has secured major international corporations as investors in the £8 million leading Scottish project. Those include TOTAL, the major French-owned oil group, Norwegian ship-owner Fred Olsen and ABB, the major 140,000-employee Swiss/Swedish electrical outfit. Last month, ABB won the major contract from MeyGen Ltd to provide and install all the on-land equipment to be housed at Ness of Quoys, on Gills Bay for its Inner Sound demonstration array. ABB will also provide and oversee the cabling to link the 6-turbine £51 million project with the UK’s electricity National Grid , initially via Hastigrew, Bower and later via the new Gills Bay sub–station, being provided by grid contractors Scottish Hydro Electric Transmission Ltd at Philip’s Mains, East Mey. 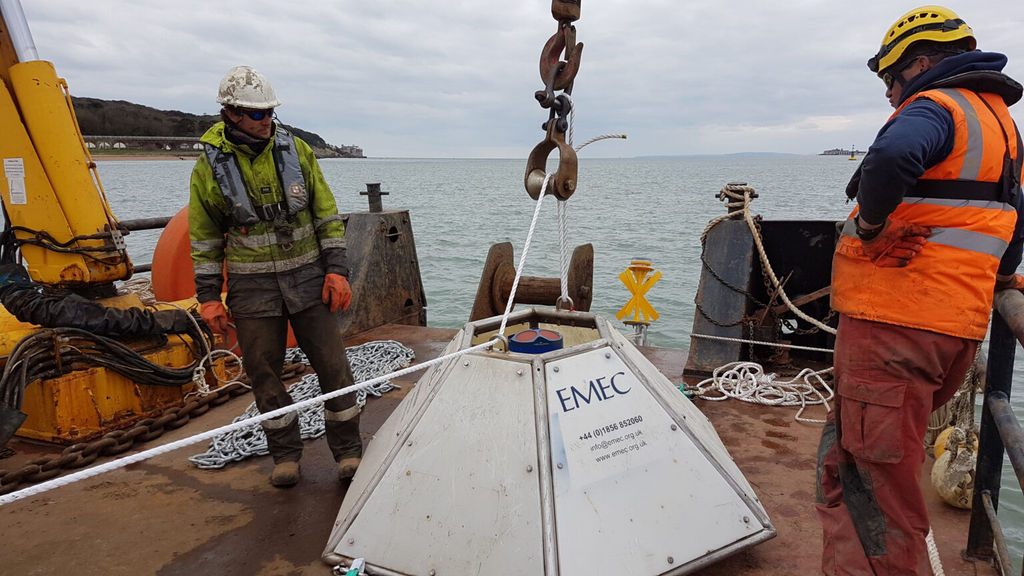