UNITe and Siemens to Jointly Develop Tidal Power in France

UNITe and Siemens have signed a memorandum of understanding to provide a joint response to the French Government call for expressions of interest to install pilot tidal energy plants off the French coast at Cotentin and Finistère zones.

This memorandum of understanding is a formal agreement between Siemens and its partner UNITe to take an active part in developing the tidal energy sector in France and the associated local supply chain. The development of this co-operation follows the announcement of the call for expressions of interest by the French President on September 30, 2013 in Cherbourg.

The call for expressions of interest specifies seven pilot plant installation sites in the Alderney Race [Raz-Blanchard in French] and Fromveur areas. This partnership with UNITe, a developer of renewable energy projects, is the result of a partnership search that Siemens initiated several months ago, with the requirement to build up industrial partnerships in the field of marine energies in France. Initially, the partnership will involve responding to the specifications of the ADEME [French Government environmental and energy agency] calls for expressions of interest in pilot tidal energy plants.

Andreas Goergen, the Siemens France Energy Sector Director stated “Siemens is an industrial business facilitating the energy transition in France. Our ambition is to create French-German partnerships to form the future backbone of renewable energies. This partnership with UNITe forms part of that process. UNITe’s experience as a developer and operator of renewable energy projects, its knowledge of the regulatory aspects and it’s pioneering spirit in the emerging market of tidal energy in France are major assets in building up and expanding the tidal energy industry in France.”

Hugues Albanel, Chairman of UNITe’s Executive Board, asserted “we were attracted by the operational quality of Siemens’ owned business Marine Current Turbines Ltd who developed the SeaGen turbine which combines innovation with realism in maintenance. Siemens’ experience in running marine energy projects in the British Isles via it’s ownership of Marine Current Turbines is invaluable and brings to this very open partnership the existing momentum of continuous industrial investment over many years. Installing pilot tidal power plants in response to the call for expressions of interest will be the first stage of this”.

A partnership founded on sharing experience

UNITe is an SME established in 1985. It is a state-of-the-art engineering company specialized in renewable energy production and project development operating throughout France. Similarly, Siemens has solid experience in the tidal energy sector through its 2012 acquisition of Marine Current Turbines Ltd. Under this agreement Siemens has undertaken to provide UNITe with the benefit of the development introduced by the latest generation Marine Current Turbines SeaGen tidal turbines; to work with partners in France to maximise the local work content and promote a European tidal energy supply chain.

The Siemens business, Marine Current Turbines is currently developing the second generation SeaGen tidal turbine, which the partnership intends to deploy in France. The first-generation 1.2-MW version of the SeaGen is the result of extensive experience in tidal power technology development. SeaGen was developed by Marine Current Turbines Ltd, and since 2008 has been producing eco-friendly electricity off Strangford Lough in Northern Ireland. This tidal turbine has already produced over 9 gigawatt hours (GWh) of electricity so far and has demonstrated that it can supply 1 GWh to the grid every 68 days. Furthermore, SeaGen has demonstrated that it has no significant or adverse environmentimpact; it was installed in Strangford Lough, Northern Ireland in 2008, which is a Natura 2000 site, and has undergone an extensive environmental assessment under strict licensing conditions. This monitoring was conducted under the direction of an independent scientific committee with the support of Marine Current Turbines staff. 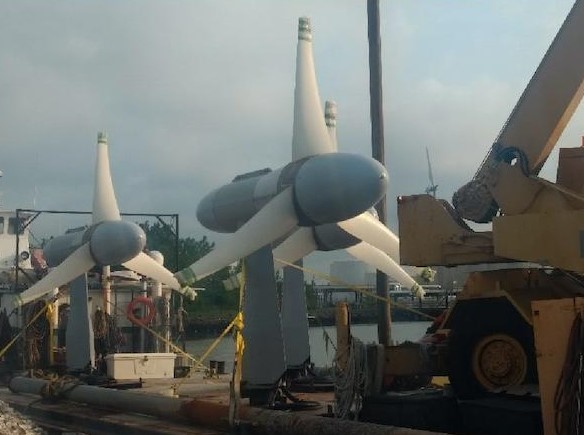