Update: Fire put out aboard tanker off Sri Lanka coast

The fire onboard the Panama-flagged crude oil tanker New Diamond has been completely extinguished, the Sri Lanka Navy said in an update on 6 September 2020.

“Nearly 79 hours after the distress was reported, the Sri Lanka Navy and other stakeholders were able to bring the fire under control at around 3.00 p.m. this evening, as a result of their strenuous firefighting effort.”

As informed, with the help of dry chemical powder sacks, the Sri Lanka Air Force managed to smother the raging flames onboard.

As Offshore Energy reported last week, New Diamond was transporting 270,000 metric tonnes of crude oil from the Port of Mina Al Ahmadi in Kuwait to the Port of Paradip in India when the fire broke out aboard the ship on 3 September. The tanker was sailing 38 nautical miles off Sangamankanda Point when it caught fire after an explosion of a boiler in the ship’s main engine room.

One crew member died in the explosion while the remaining 22 men were evacuated.

The successful and timely management of the incident helped in averting a major maritime catastrophe that could have occurred, according to the navy.

The Indian Navy and salvage specialist teams plan to board the distressed vessel and inspect its interior using high-tech equipment. A team of ten British and Dutch experts, including salvage operations experts, assessors and a legal adviser, arrived in Sri Lanka on Sunday under the facilitation of a company that works as the commercial and technical operator of MT New Diamond. The team of experts will make an assessment of the damage caused to the ship. Based on their recommendations, further moves regarding the vessel will be decided.

“Although the fire has now been completely doused, there is a possibility of a recurrence of the fire due to the high temperature inside the ship and environmental influences. Therefore, the Sri Lanka Navy is on high alert and is ready for any emergency,” the navy explained.

The Sri Lanka Navy added it will continue to provide assistance to the ill-fated ship until it leaves the country’s maritime search and rescue region. 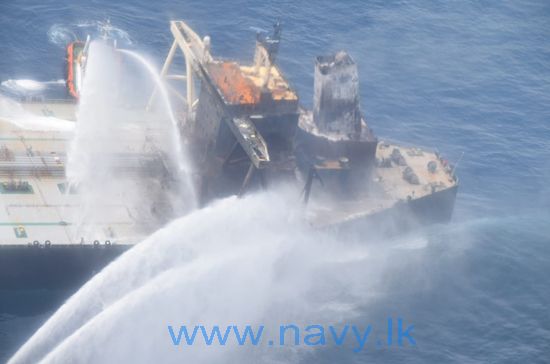