The storm-hit cruise ship Viking Sky has departed the Port of Molde for Norway’s Kristiansund, where it will undergo necessary repairs, according to the Norwegian Maritime Authority.

The 228-meter ship got underway on March 27 under its own power and with a tug escort.

Viking Sky arrived at the Port of Molde with the help of tugs on Sunday after battling a storm in the Hustadvika stretch for well over 24 hours.

The 2017-built ship sent out a mayday signal after losing its engines on Saturday afternoon, prompting a rescue operation in which close to 500 passengers were airlifted by helicopter.

The Norwegian Maritime Authority is working with the company to determine the cause of the engine failure, which almost resulted in the ship hitting rocks in the shallow waters of the stretch.

Repairs are to be carried out at Vestbase, according to a report from Norwegian news site Aftenposten, which further said that cruise operator Viking Ocean Cruises expects the ship to return to sea in April.

Following the accident, the Clean Arctic Alliance has used the opportunity to call for an end to heavy fuel oil use, pointing to the possibility of the ship spilling oil off the Norwegian coast in a worst-case scenario.

“According to reports, the Norwegian Coastal Administration (Kystverket) has said that the Viking Sky was reported to be carrying 343 tonnes of HFO on board, along with 465 tonnes of diesel,” Dr Sian Prior, Lead Advisor to the Clean Arctic Alliance said.

“The grounding of the vessels created a strong risk of an oil spill, which would have been devastating for the environment and local communities.”

“This summer, similar cruise ships carrying thousands of passengers will sail in Arctic waters and in other vulnerable regions, far from search and rescue facilities, including helicopters and tugs. In addition to the risk to lives, most of these vessels will be powered by oil-based fuels, including HFO, which pose a grave risk to the Arctic environment, and to the livelihoods of local Indigenous people. A spill of HFO is likely to take from months to years to be completely cleaned-up.”

An Allianz report on Maritime claims trends from last year revealed that machinery breakdown (including engine failure) continued to be among the largest causes of loss by value and frequency. In June 2018, the US Coast Guard warned that fuel contamination at the Port of Houston was causing engine problems – the problem has since spread to other regions as far apart as Singapore and Panama – and is thought to have affected some 200 vessels. 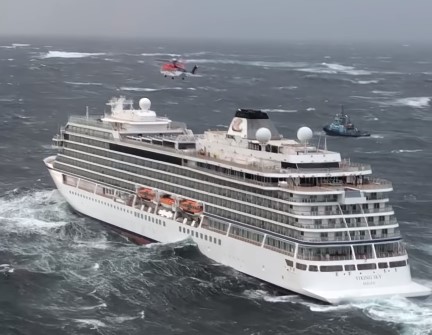