German giant Volkswagen Group is to send the first LNG-fuelled vessel it chartered from Siem Car Carriers on its maiden voyage.

The Siem Confucius is the first of two vessels built at China’s Xiamen Shipbuilding yard which will replace Volkswagen’s conventional heavy oil-powered ships.

The car freighter will leave Germany’s port of Emden on Tuesday with more than 4,800 new vehicles on board, according to Volkswagen.

The LNG-powered vessel is setting out on a three-week voyage to Mexico, and on the way there it will call at ports in Canada and the USA.

The German giant will use both of the vessels on the trans-Atlantic route, so-called America Round Tour, from Emden to Mexico.

The second vessel Siem Aristotle will embark on its maiden voyage later this year.

First carmaker to use LNG-powered vessels

With these two vessels, Volkswagen becomes the first automaker to use LNG-powered ships in long-distance overseas distribution of cars and light vehicles.

The vessels have two LNG tanks with a capacity of 1,800 cubic meters, each.

That’s enough for a complete round trip, and it ensures a ten percent reserve tank, sufficient for several days, according to Volkswagen.

Due to their duel-fuel propulsion, the ships are also “future-proof for further developments in regenerative fuels”.

In the medium-term, they could run on biogas or e-gas and thus be virtually CO2-neutral, according to Volkswagen.

“We are proud to commission the world’s first LNG vehicle transporters of this size”, said Thomas Zernechel, Head of Volkswagen Group Logistics, adding that this is an important part of the company’s decarbonization strategy.

With its “goTOzero” strategy, the German company aims to reduce its total CO2 emissions by 30 per cent by 2025 and to be CO2-neutral in its balance sheet by 2050.

To achieve this, all transportation – by sea, road and rail – must be climate-friendly.

“We have to take action now, because ships like the two LNG freighters will be in operation for many years”, said Zernechel. 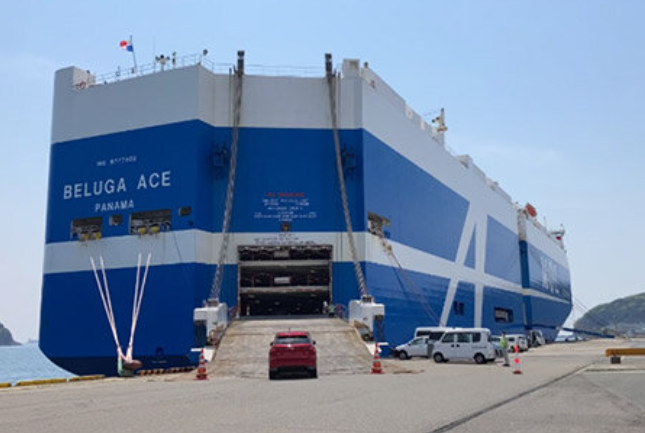