There is a paradox facing today’s shipbuilding industry. While modularity is increasing in the structural aspects of the shipbuilding process, the use of modular software is still in its early stages. It is time for a change: Inter-system connectivity is extremely important. Many different equipment suppliers are involved with building a ship, but instead of the user working with 30 or 40 unconnected systems, each with different interfaces, it is much simpler and easier to implement just one HMI [Human Machine Interface] in the ship management system.

There is a paradox facing today’s shipbuilding industry. While modularity is increasing in the structural aspects of the shipbuilding process, the use of modular software is still in its early stages. It is time for a change: Inter-system connectivity is extremely important. Many different equipment suppliers are involved with building a ship, but instead of the user working with 30 or 40 unconnected systems, each with different interfaces, it is much simpler and easier to implement just one HMI [Human Machine Interface] in the ship management system.

Bachmann’s participation in the VDMA’s ‘MTP work group’ is going a long way to answer this problem. “Our goals are faster engineering, commissioning and integration. With MTP (Module Type Package), we can realize these targets.”

Bachmann has cooperated with educational institutes and numerous OEM suppliers to develop a modular automation solution, and therefore a software standard for the entire shipbuilding industry. Using its atvise® scada platform, Bachmann has already carried out successful preliminary investigations to import MTP files from three different equipment manufacturers. Immediately after import, OEM’s can control their equipment according to their existing visualisation. This allows users to maintain their existing screens, including graphics, icons, buttons, and design, according to their corporate identity.

The Bachmann system has implications for the entire supply chain. For OEM’s, MTP makes it easier to control the visual interfaces of sub-applications such as thrusters, gearboxes and other systems. It’s as straightforward as installing a printer in your office. It also means full system approval, including electrical interfaces during the Factory Acceptance Test.

For the systems integrator, MTP export and import capabilities translate to cost reductions for engineering, PLC, visualization and commissioning processes. Moreover, the reduction of commissioning times is a major benefit for shipyards; for example, commissioning on board a cruise ship can be reduced by up to 400 working-days.

However, the ultimate benchmark is the benefit for ship owners. Besides reduced service costs through fewer engineering and commissioning errors, the efficiency of the retrofit process is dramatically improved. By implementing a new system via MTP, owners are assured that the new, retrofitted equipment will ‘speak the same language’ as the existing ship management system.

Ship bridge design faces a very similar challenge: a bridge design should integrate multiple systems from multiple suppliers into one coherent and workable configuration. The reality is that, instead of being user-friendly, many bridges are often inefficient and error prone. In choosing the best solution for its fleet, an owner may use several suppliers, all of which bring their own interfaces. But you have to consider the crew – their work is made much easier with a standardised framework and working environment throughout the fleet.

Bachmann’s collaboration with Norwegian design consortium OpenBridge aims to address this problem with an open-source design framework. This aims to create safe and efficient workspaces with seamless design and integrated technical systems. The solution is based on Bachmann’s atvise® scada software applied with numerous OpenBridge functions. One such function is four different levels of screen brightness: night, dusk, day and bright. This can be crucial: If you have ever been in the wheelhouse of a ship at night, then you know that an over-bright screen can really affect your eyes. This has a major impact on what you can see at sea.”

In addition, an OpenBridge screen is characterised by display clarity, which can be tailor-made to the owner’s requirements. There are many elements defined in OpenBridge. Crew members on the bridge can personalise applications and fine-tune the system according to personal preferences, for example with engine data, rudder position, or other navigational components such as maps. Moreover, ship owners with multiple vessels can implement the same look and feel throughout the fleet.

Bachmann has kept safety at the forefront of OpenBridge. Alarms are detailed to the extent that a user can immediately identify and locate a problem. This facilitates a clear and well-defined response, rather than the trial-and-error approach of ‘hot swapping’ hardware. A further benefit of the Bachmann/OpenBridge collaboration is that it is based on open-source software. The only investment on the client side is the purchase of Bachmann’s atvise® scada software and training. We hope that more people will start using OpenBridge – collaboration with our customers allows us to continuously develop new features. This will be a major advantage for clients in the future.

For all its automation solutions – including its work with MTP and OpenBridge – Bachmann’s collaborative philosophy strives to bring together a wide range of partners to share strengths and solutions. We learn from ship-owners and translate their visions into tangible automation solutions so that we can create high quality, fully-tested solutions, reduce precious development and commissioning time, and become a driving force for automation in the maritime industry.

Headquartered in Feldkirch, Austria, Bachmann is a rapidly expanding organisation with over 500 employees worldwide. The company, which is specialised in automation, grid measurement and protection, visualisation and condition monitoring for plants and machines has been developing automation and system solutions for customers around the globe for over 50 years.

‘The Bachmann system has implications for the entire supply chain’ 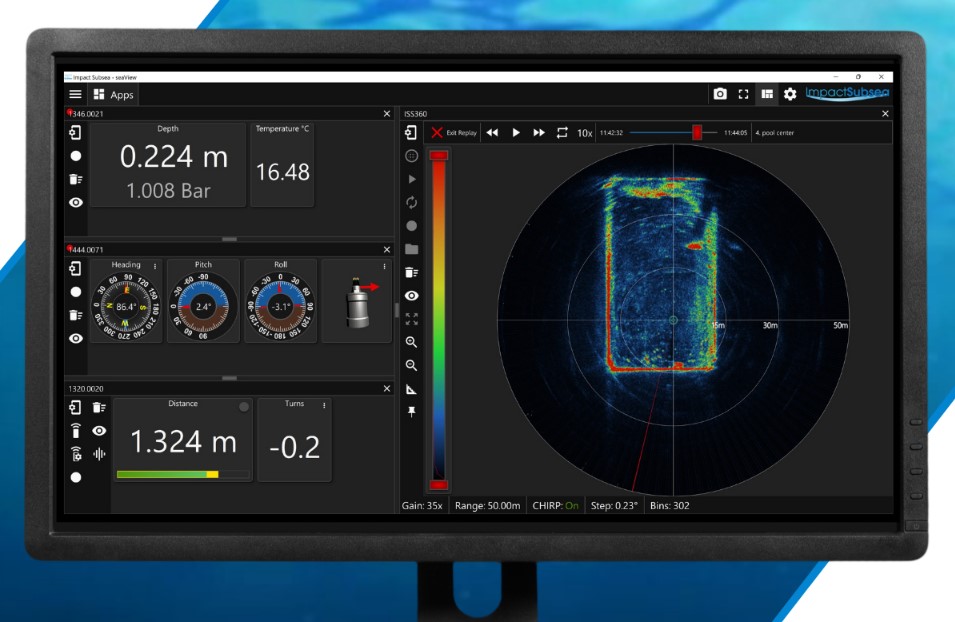 Impact Subsea unveils third generation of seaView software
Posted: about 1 month ago
Researchers revamp MHKiT software for marine energy industry
Posted: about 1 month ago
DNV moves to the forefront of floating solar industry standardization
Posted: 8 days ago
ABL rolls out emission tracking software for seaport industry
Posted: 2 months ago
Premium
NAPA: Future green ships to be made of data just as much as steel
Posted: 3 days ago