Finarge is a Brazilian shipping firm founded in 2008 as a subsidiary of the Italian company Finarge SRL, which was established in 1981 by the Italy’s Rimorchiatori Riuniti S.p.A.

The total payment amounts to $94.4 million. As outlined in the investment agreement signed by CBO and Finarge SRL, the payment was divided into three parts. The first part includes a payment in cash, where a part was paid up to 13 September 2021 and the rest is due over the next 24 months. The second part entails the assumption of the existing debt in Finarge Apoio Marítimo.

To comply with the third part, CBO has approved the increase of its capital by issuing 7,762,856 new common, nominative, book- entry shares with no face value to enable Finarge SRL to become a shareholder. The new shares represent 5.60 per cent of the company’s share capital, which will be subscribed and paid in by Finarge SRL.

CBO will now add five more AHTS vessels to its fleet, including the vessel AH Giorgio P., which is an ocean terminal AHTS type under the Brazilian flag, and four foreign-flagged AHTS vessels. These are AH Valletta and AH Varazze, both AHTS 19,000 break horse power (BHP) type, AH Liguria with AHTS 16,000 BHP and AH Camogli, which is AHTS TO type.

Four of these vessels already have signed contracts, ranging from two to four years, with Petrobras, representing a gross revenue backlog of approximately $126 million. The vessels under contract are AH Giorgio P., AH Varazze, AH Liguria and AH Camogli, while AH Valletta does not have a contract yet, although, it is already in Brazil and fully capable of operating, according to the company.

CBO will also be incorporating Finarge’s staff in addition to its assets while taking over its operations in Brazil. This means that CBO now has more than 1,450 employees among maritime and administrative staff.

CBO claims this acquisition will enable it to “consolidate itself as one of the main AHTS operators in the Brazilian offshore maritime support market, emphasizing its ability to adapt to the requirements established by its customers, as in the case of the AHTS TO, whose operation focuses on supporting FPSOs in the handling and maintenance of hoses, which has gained relevance in Petrobras’ bids this year.”

Given the availability of CBO tonnage, this transaction will enable all foreign Finarge SRL vessels to receive the Brazilian Special Registration (REB), as foreseen by the Brazilian legislation.

It is worth mentioning that last year in November, aiming to improve its vessel’s energy consumption and reduce its carbon footprint, CBO signed an agreement with Wärtsilä group to convert the vessel CBO Flamengo to operate with hybrid propulsion, making it the first vessel in Latin America to be fitted with a battery pack compliant with the DNV-GL’s ‘Battery Power’ class notation. 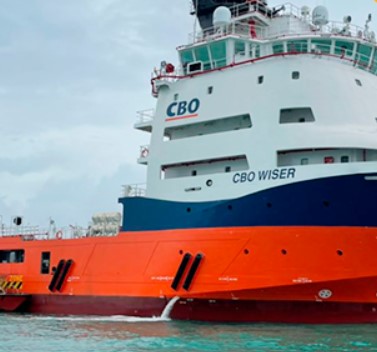