Drydocks World & Maritime World recently hosted a meeting with its business & commercial agents who represent the organization’s interests in different areas overseas. The event was attended by a large number of agents who gathered to discuss the latest projects handled by the company and to understand the requirements for the future.

Welcoming the agents, His Excellency Khamis Juma Buamim, Chairman, Drydocks World & Maritime World thanked them for the support that they have displayed to the company in the past. He informed them that this event had been organized to share with them the company’s direction going into the future so such support could be continued and enhanced with clear understanding of the organizations long term vision and strategy.

In his presentation titled “DDWMW-Vision to the Future”, HE Buamim, presented to the gathering the vision and strategy set for the organization going forward. He addressed key issues related to setting the broad vision for the organization as well as the strategy and the areas of thrust determined for the business. He touched upon the goals and action planning process for achievement of these agreed targets. Some of the recent and futuristic initiatives and achievements of Drydocks World and Maritime World were highlighted and he expanded on the practicalities in formulating strategies and business plans for the maritime and offshore sector in the light of managing risk and global economic variables. This included Drydocks World success in its business restructure and the role of industry leaders in visualizing and managing change, an initiative in which the company has taken a leading role.

In outlining the role to be played by Drydocks World & Maritime World partners in making this vision a reality he said: “Strong networks keep communication channels open with clients as well as being able to determine the nature and type of projects which are being envisaged in the industry. Your role as our business partners will be to ensure that we are represented globally in the areas in which our future business is forecast to grow. Keeping you updated on our business on a regular basis will only strengthen our long standing partnership and allow you to make known our areas of business interest and our capabilities. You are all an integral part of this company and we will hold similar meetings in future to discuss issues and plans to our mutual benefit.”

During his address HE Buamim also emphasized the business planning process and provided details of the world leading projects currently handled by Drydocks World and Maritime World. These include the Dolwin Beta, the HVDC Offshore Wind Energy Platform, the Prelude FLNG Turret, the Solan subsea oil storage tank, the underwater Discus hotel and the MCV conversion projects of the Eagle Louisiana and the Eagle Texas.

Mr. Ali bin Towaih Al Suwaidi, Vice President Business Development & Commercial, Drydocks World later addressed the agents during which he briefed them about the need to put in place concrete action plans to ensure that the agreed strategy was achieved. Touching upon the long standing relationship with the company’s agents, Al Suwaidi stressed the need for the efforts of agents to change to support the vision and direction set by the Chairman. He shared with the agents recent statistics of projects in all areas undertaken by the yard and the role played by the agents in achieving the organizations business results.

Mementos were presented to the agents by Mr. Ali Al Suwaidi and Dr. Markus Voege, Vice President Production & Operations, Drydocks World as a gesture of thanks. 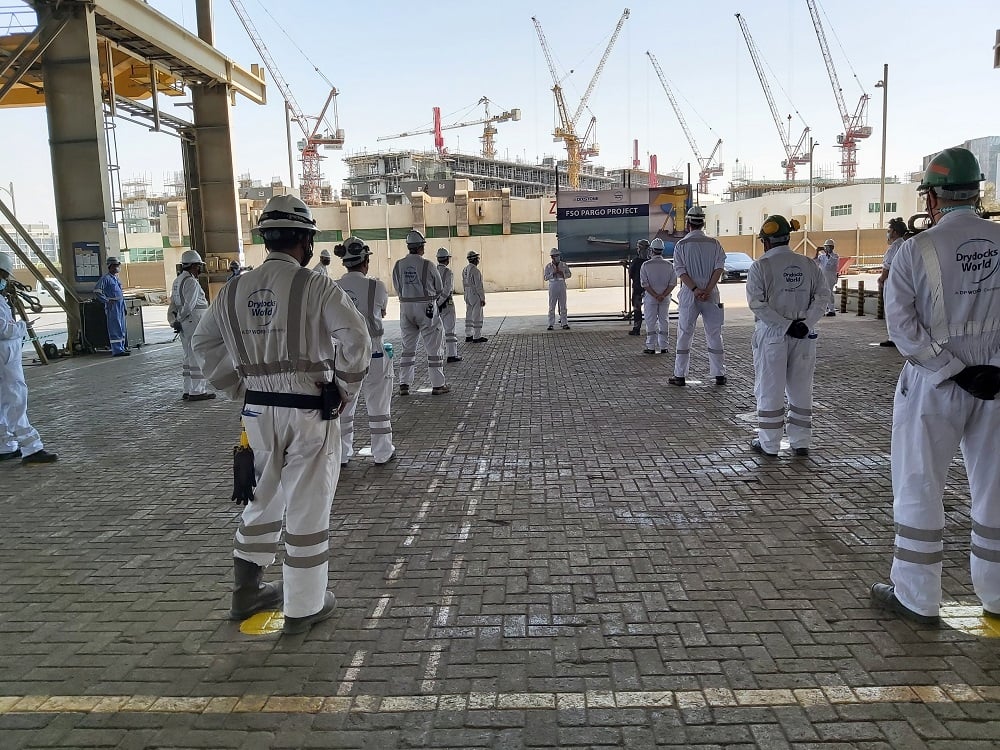