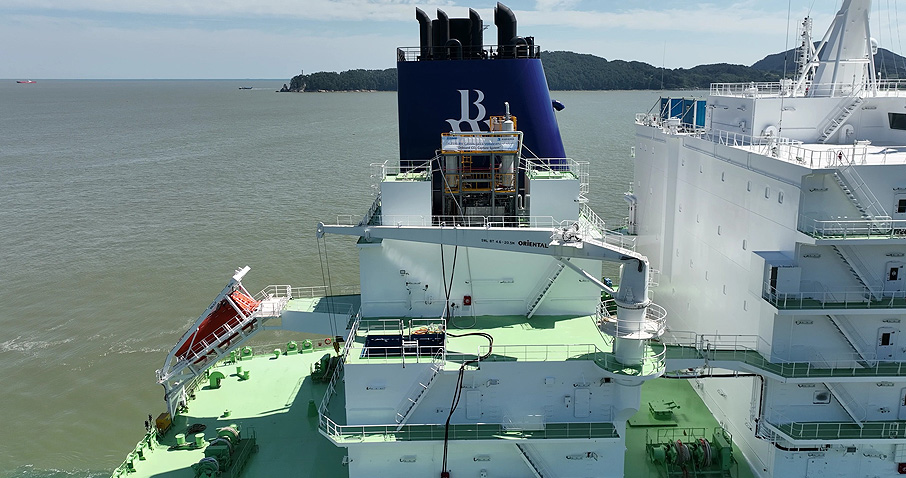 DSME verifies its onboard carbon capture system on an LNG carrier

South Korean shipbuilder Daewoo Shipbuilding & Marine Engineering (DSME) has completed a verification test of its carbon capture and storage technology on board an LNG carrier.

The onboard carbon capture and storage (OCCS) has been jointly developed with Hi Air Korea, a producer of equipment for heating, ventilation, and air conditioning. The duo has been working on the technology since 2020.

The technology uses ammonia water absorbent and dissolves carbon dioxide emitted by the ship’s engines into an aqueous sodium hydroxide solution and converts it into a mineral form. The absorbent is regenerated and reused during the process.

The system enables the CO2 to be captured and stored onboard in the form of a byproduct before being transported to shoreside facilities at a designated port for unloading.

As explained, the technology consumes considerably less energy when compared to other onboard carbon capture solutions on the market, and the amount of additional CO2 generated by the equipment operation is relatively small.

DSME said that the successful trial of the OCCS on an actual ship positions the company as a “leader of eco-friendly shipbuilding technology.”

The test has been carried out in cooperation with Greek LNG carrier owner and operator GasLog and the American Bureau of Shipping (ABS).  The three companies signed a joint development project (JDP) focused on developing onboard carbon capture and storage system in June this year.

Under the JDP, the parties will collaborate on the design of an optimal OCCS for an LNG carrier to be built by DSME and verify the system through risk analysis and tests before installation and operation.

The installation of the system is targeted to coincide with the construction of four LNG carriers ordered by GasLog from DSME last year. For its part, GasLog will undertake the technical requirements for the installation and operation of the OCCS as well as ship management expertise.

Given the growing interest in carbon capture technology and the importance of the development of a sustainable CO2 value chain, DSME has been working on the various aspects of the CCS including the transportation link.

The shipyard has teamed up with the Korean Register on the development of a 40,000 cbm liquefied carbon dioxide carrier (LCO2) featuring a next-generation cargo handling system.

DSME also plans to develop a cargo handling system (CHS) using the latest technology to prevent CO2 emissions and ensure navigational stability. All the systems will be examined for compliance by KR.

It has also received approval in principle for a 70,000 cbm class LCO2 Carrier from ABS.

The demand for vessels capable of transporting carbon dioxide at scale from emissions sources to storage sites is expected to surge as carbon capture’s role in decarbonizing global industries gains on importance.