The duo said that the partnership would focus on offering shipowners the benefits of e1 Marine’s methanol-to-hydrogen reformer for generating fuel for PEM fuel cells.

The maritime advisory and project management firm has been working as a facilitator of investments in methanol powered vessels across multiple market segments such as container, bulk and tanker vessels.

e1 Marine’s M-series methanol to hydrogen generator has won approvals for marine applications from the Republic of the Marshall Islands (RMI) Maritime Administrator as well as the Lloyd’s Register.

The technology produces hydrogen on demand at the point of consumption. It enables production of fuel cell-grade hydrogen from methanol and water. The system produces zero particulates, zero NOx, zero SOx, and less CO2 than a diesel generator. In addition, when using renewable methanol, the system produces near zero greenhouse gas emissions, e1 Marine said.

The fuel cell system was developed through collaboration between Element 1 Corp, a methanol-to-hydrogen technology company, Ardmore Shipping Corporation, an independent owner and operator of mid-size product and chemical tanker vessels, and Maritime Partners, a tailored leasing solution provider to the maritime industry..

As reported earlier, e1 Marine will deliver its methanol-to-hydrogen fuel cell, which is said to consume 35% less energy than diesel generators, to the M/V Hydrogen One, expected to be the world’s first methanol-fuelled towboat.

The towboat will join the U.S.-based Maritime Partners’ fleet and become available for charter in 2023.

“The local representation in North Europe will focus on enabling shipowners to meet decarbonization goals set for 2030 and beyond using methanol-reforming technology. We are ready to support first-movers – those leaders who will forge the way forward on decarbonization. Our on-demand power system has no moving parts, generates no vibration and is more future-proof than internal combustion engines due to its greater efficiency and clean power production,” Robert Schluter, Managing Director at e1 Marine, said.

“We are confident that by partnering with Green Marine who not only understands the intricacies of our technology but has the broader knowledge and networks to hold meaningful conversations with ship owners in Europe, will help to accelerate uptake of this vital solution in the region.”

“We are taking action to help decarbonize the global shipping industry through innovative methanol-based solutions that align with IMO emission reduction targets for 2030/2050 and the Paris Agreement. Methanol technology is transforming shipping and delivering an economically feasible solution. We offer ship owners turn-key, methanol-based, maritime transition solutions and have in-house capabilities and support functions across the entire value chain.

“Green Marine Engineering believes in the power of e1 Marine’s methanol-to-hydrogen reformer technology and its capability to reduce shipping’s environmental footprint, and we welcome the opportunity to represent e1 Marine across Northern Europe.”

Given its low emission features, e1 Marine methanol-to-hydrogen generator has a high potential as a decarbonization solution for shipowners aiming to meet targets set by the EU and International Maritime Organization (IMO). 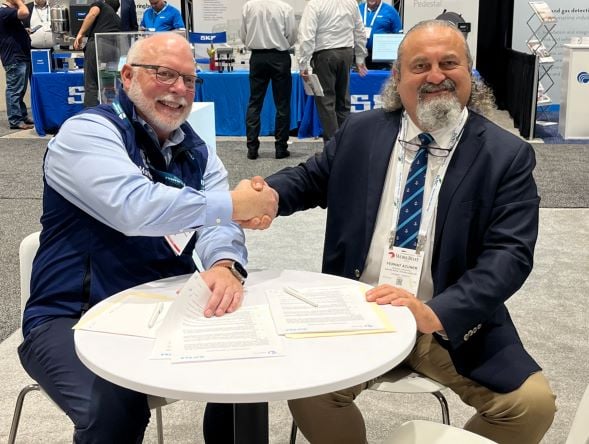 e1 Marine and NAVTEK partner on hydrogen-powered vessels
Posted: 2 months ago
Premium
A year in review for methanol as marine fuel: 82 ships by 2028
Posted: about 1 month ago
e1 Marine’s methanol to hydrogen generator wins another approval
Posted: 5 months ago