Recognising the huge interest from other ferry operators both in Australasia and around the world, East By West said it wanted to secure a built slot for its next ferry.

Having exceeded performance expectations in terms of speed, range, energy use and charging speed, Ika Rere has wowed those involved in the project and impressed passengers with its quiet, smooth and fast voyage experience, according to the ferry operator.

As fuel costs rise to staggering levels globally, East By West is reaping the benefits of the 132 pax electric vessel, with incremental route energy costs being slashed by 82%. This equates to cost savings of $180,000 per year when compared to their diesel boats doing the same journey.

By adding another electric vessel to the fleet, East by West will be able to run their entire existing schedule using the two fully-electric ferries. With greater onboard energy storage, a second fully-electric ferry is set to save the operator a further $280,000 per year in overall energy costs, and allow redeployment of its existing ferries to start a basic service for commuters to and from the Miramar peninsula (itself then providing a basis for a further 2-3 electric ferries). This has been one of the driving factors for East By West seeking further investment in order to secure a second fully-electric vessel.

“Following an in-depth business case, and with the success of Ika Rere, we’ve made the decision to push for funding for a second fully-electric ferry to be built by WEBBCo. We always knew we wanted to expand our electric-powered route capabilities, and with global interest in New Zealand’s electric boatbuilding, we wanted to secure a build slot for the second vessel. Ika Rere is performing exceptionally well, and we had no hesitation about continuing with our partners,” Jeremy Ward, Managing Director at East By West Ferries, commented.

The second electric vessel will be a sistership to Ika Rere, and run on the existing route between Queens Wharf – Matiu/Somes Island – and Days Bay. It will carry 132 passengers; however, it will be equipped with a newer iteration of battery technology, enhancing onboard energy storage.

Both vessels will be charged at Queens Wharf, with the potential to expand charging infrastructure to use the newly released Megawatt Charging Standard (MCS), which is also being considered within the project.

“We are glad to be working with East By West for a second time as they lead the way for commercial operators in New Zealand. Following the successful launch of Ika Rere, we have seen extensive interest from Government organisations, tourism operators and commercial vessel operators seeking a more economic and environmentally friendly transport option,” Fraser Foote, WEBBCo Managing Director, said.

“We are excited about our next phase of growth and hope to sign contracts for an additional 2-3 vessels for organisations across NZ by the end of this year. With our new workshop space and expanding team, we expect to be able to build 3 vessels concurrently.” 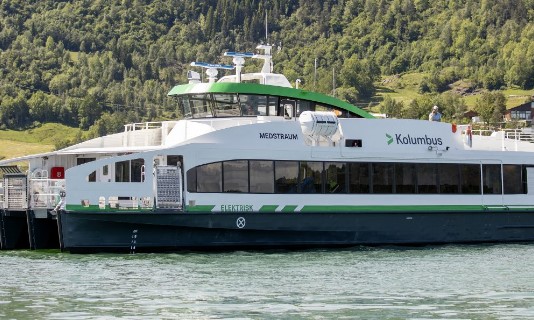