Hydrex team has replaced the three leaking bow thruster shaft seals of a 400-meter container ship in Gdansk, Poland. The operation was performed on-site and underwater using the company’s flexible mobdocks. The vessel was able to continue its commercial activities without any hindrance or delay.

Together with all the necessary equipment, the diver/technicians mobilized from the Hydrex fast response center in Antwerp to the vessel’s location. After they set up a monitoring station on the quay, the divers started the operation by removing the rope guard covering the thruster seals. They could then perform a detailed inspection of the seal assembly and make a good assessment of the damage.

The Hydrex flexible mobdocks were installed at both ends of the thruster tunnel. Next the team evacuated all water from the tunnel. In this manner a working environment with drydock-like conditions was created. This is essential for any permanent seal replacement. The divers removed the first seal and replaced it with a new one which was then bonded. This procedure was repeated with the other two damaged seals. All seals showed cuts at the underside, which had caused the oil leak.

The operation ended with succesful leakage tests, the reinstallation of the rope guard and the removal of the flexible mobdocks.

During the operation representatives of both the manufacturer of the shaft seals and the bow thruster OEM were present. They followed the operation and gave their approval.

Ultra large container vessels like this 400-meter one have a corresponding large thruster tunnel. This was however no problem because the Hydrex flexible mobdocks can be easily adapted to the circumstance. They can be used for a wide range of repair or maintenance work on all types and sizes of thrusters and vessels.

By performing the operation on-site and underwater, the divers made it possible for the owner to keep his vessel out of drydock. This was extremely important because the ship was only six months old. The Hydrex team worked in shifts around the clock. They finished the job well before the crew had concluded the cargo operations. This allowed the ship to sail perfectly on schedule. 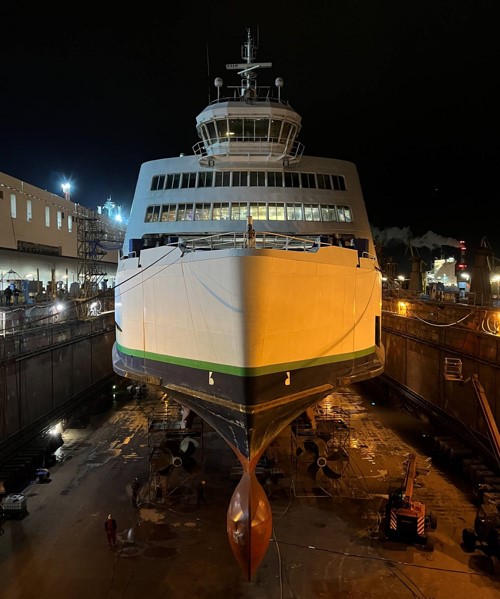