Singapore-based port operator Jurong Port has joined the Castor Initiative, a global partnership that is committed to make zero-emission shipping a reality.

In January 2020, the four partners decided to work together on the ammonia-fuelled tanker project. They were later joined by MPA and Yara.

With Jurong Port as the Castor Initiative’s latest partner, the multinational coalition will now have an even wider and diverse circle of maritime expertise to ensure and support the complete ecosystem required for the ammonia-fueled tanker to operate sustainably on water, the project partners said.

“We are delighted to be part of The Castor Initiative, which is determined to take concrete steps to meet IMO 2050 targets through the development and deployment of ammonia-fuelled ships,” Ooi Boon Hoe, Jurong Port Chief Executive Officer, said.

“As actions by the shipping industry in meeting the decarbonization goals are gaining momentum, we recognize that there could be multiple pathways for future marine fuels.”

“Being the operator of the busiest bunkering terminal in the world’s largest bunkering port today, Jurong Port is keen to facilitate the adoption of such future marine fuels, including ammonia, by providing suitable supporting bunkering infrastructure. We look forward to contributing to the success of The Castor Initiative and reinforcing Singapore as the world’s leading bunkering hub.”

“We welcome Jurong Port to The Castor Initiative … as we journey together to commercialize the development of our first ammonia-fuelled tanker by 2024…We look forward to establishing further concrete industry milestones with all our partners as collaboration is a must and we hope that the Castor Initiative will inspire others to join forces to work together seamlessly to accomplish the industry’s GHG aspirations ahead of 2050,” Datuk Yee Yang Chien, MISC President and Group CEO, commented.

“The collective drive to decarbonise the maritime sector is gaining momentum and deep-sea zero-carbon vessels will be in operation by the middle of the decade. Collaboration among the Castor Initiative partners on an ammonia-fuelled tanker continues apace and we are delighted that Jurong Port has joined our development project and will support our efforts to deliver technically viable and safe zero-emission shipping,” Nick Brown, LR CEO, said

“We warmly welcome Jurong Port to join the Castor Initiative, our ambitious collaboration to make the zero-carbon deep-sea vessel operation reality…We also expect that the performance of our partners’ collective efforts will be further strengthened by the expertise of Jurong Port for future fuel bunkering including ammonia,” Jin Taek Jung, SHI President and CEO, noted.

“Jurong Port’s participation will enable us to test the port infrastructure and processes required to handle future marine fuels, including ammonia. This will enable the global shipping industry to work towards the International Maritime Organization’s 2050 targets for emissions reduction,” Quah Ley Hoon, Chief Executive, MPA, explained.

The Castor Initiative was motivated by the partners’ shared belief that the maritime industry needs leadership and greater collaboration if shipping is to meet the IMO’s GHG ambitions.

While ammonia is one of the fuels being considered by maritime stakeholders, the partners also recognise that the shipping industry will need to explore multiple decarbonisation pathways and hope their collaboration will spur others in the maritime industry to join forces on addressing this global challenge. 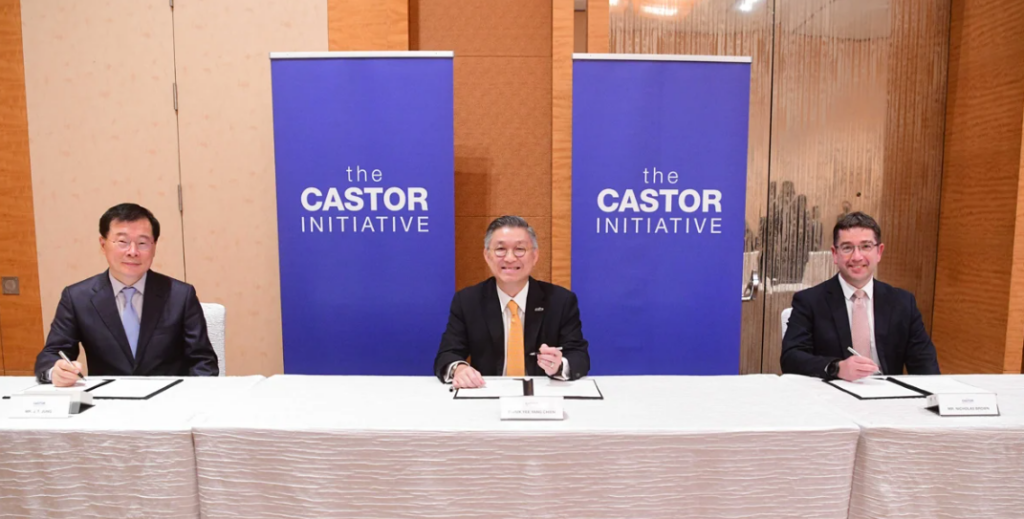