Andrew Mill, CEO of Narec, responds to the announcement by the Department for Business, Innovation and Skills (BIS) of an £18.5 million grant to fund an offshore wind test site at Narec in Blyth, Northumberland:

“We very much welcome this funding award and the continued support we have received from Central Government and Regional Development Agency, One North East, which is creating a national hub in North East England for the development of offshore wind technologies.

“Today’s announcement will enable Narec to progress with our plans to deliver a 100MW grid connected offshore demonstration platform, with the capacity to accommodate up to 20 large-scale prototypes.

“The facility will be unique in global R&D terms, enabling manufacturers and wind farm developers to identify best practice approaches across the supply chain for the development, deployment and O&M of new turbine technologies, which will be most pertinent to the Crown Estate Round 3 Programme. It will complement our existing test capabilities and the planned expansion of major component testing facilities, offering the industry a truly world class offering for the proving out of technologies in next generation machines.

“The support for the project is further recognition of the significant steps made by Narec over the last 5 years, working with global turbine, blade and electrical infrastructure manufacturers on their large turbine, blade and associated equipment development programs. It represents a huge boost to the credentials and ambitions of UK plc, now primed to lead the world and optimise the economic benefits for the UK from the expansion of the sector.

“Today’s news of the MOU signed between BIS and Mitsubishi Power Systems Europe (MPSE) is further testament to the commitment of the UK Government to realise a UK offshore wind industry. Narec welcomes this investment and looks forward to working with MPSE on their R&D programme.”

Ian Williams, Director of Business and Industry at One North East, said:

“We are delighted the Government has chosen to support this groundbreaking project.

“Narec is supporting the Agency and our many partners to attract global companies to our region and this further investment develops further our comprehensive innovation and test offer for the global offshore wind industry.

“One North East has been investing in this new market for almost a decade now. Through national investments like this, and the plans Clipper announced last week to create hundreds of jobs on the Tyne, the region is now beginning to reap the rewards of this dynamic new industry.”

Recent investment and future proposals at Narec include:

Funding for the build of a major turbine component and drive train testing rig has the support of the Energy technologies Institute (ETI) and One North East (ONE). These plans, to design the world’s largest open access offshore wind turbine drive train test rig, were announced by the Energy Technologies Institute (ETI) in February 2010. The test rig design specification is a result of nearly two years of engineering development and industry consultation by Narec and ETI. ONE will invest £10 million in the building to house the rig.

Narec recently announced construction of a 100m offshore wind turbine blade facility, extending our current capability to test the largest of offshore blades. This £15 million facility will receive public investment of £11.5m from the Department for Business, Innovation and Skills and the Department for Energy and Climate Change.

In March this year, Narec will officially open a new 27m high training facility – the UK’s first Wind Turbine Training Tower, recently installed at Narec in Blyth, Northumberland. The Training Tower is the result of a collaborative training partnership, backed by Regional development Agency, One North East, between Northumberland College, Mainstream Renewable Power and Narec. It is an open access facility, designed to allow education and training providers to deliver academic and industrial training programmes for technicians working in the wind industry and at height, both onshore and offshore.

In February 2010, Clipper Windpower Marine Limited, a fully owned subsidiary of Clipper Windpower, Inc. (‘Clipper’) announced the groundbreaking of its offshore wind turbine blade manufacturing facility at the Shepherd Offshore Renewable Energy Park in Newcastle. The new factory, a 4,000m2 facility, is expected to be completed in the third quarter of 2010 and will be the UK’s first offshore wind turbine manufacturing facility.

Two years ago, Narec supported regional development agency, One North East (ONE) in attracting Clipper Windpower to invest in North East England and locate their engineering design team for the Britannia Project in Blyth, Northumberland. Clipper is now a client of Narec, utilising our independent and confidential testing facilities to help accelerate the development of the Britannia Turbine in time for its projected rollout in Crown Estate Round 3 wind farms. 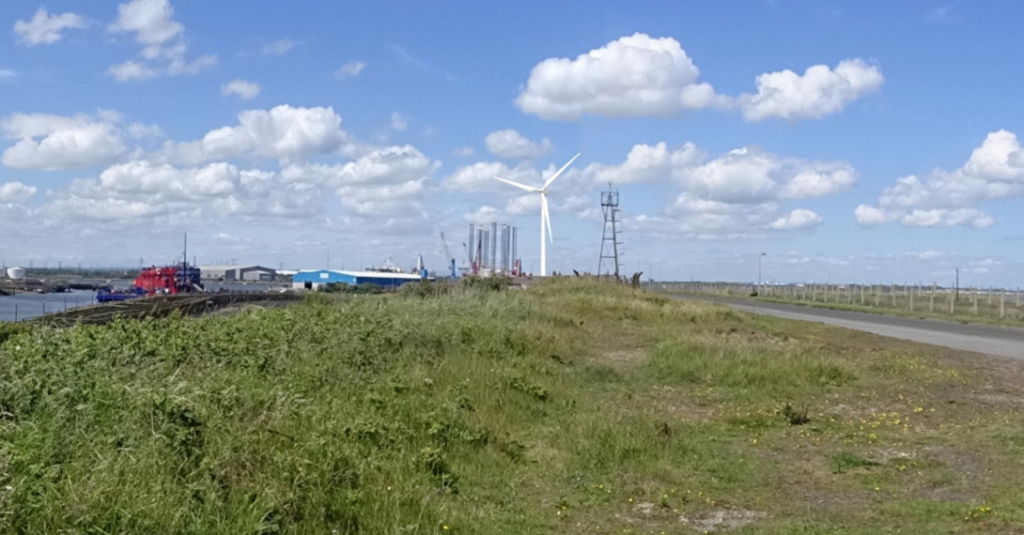