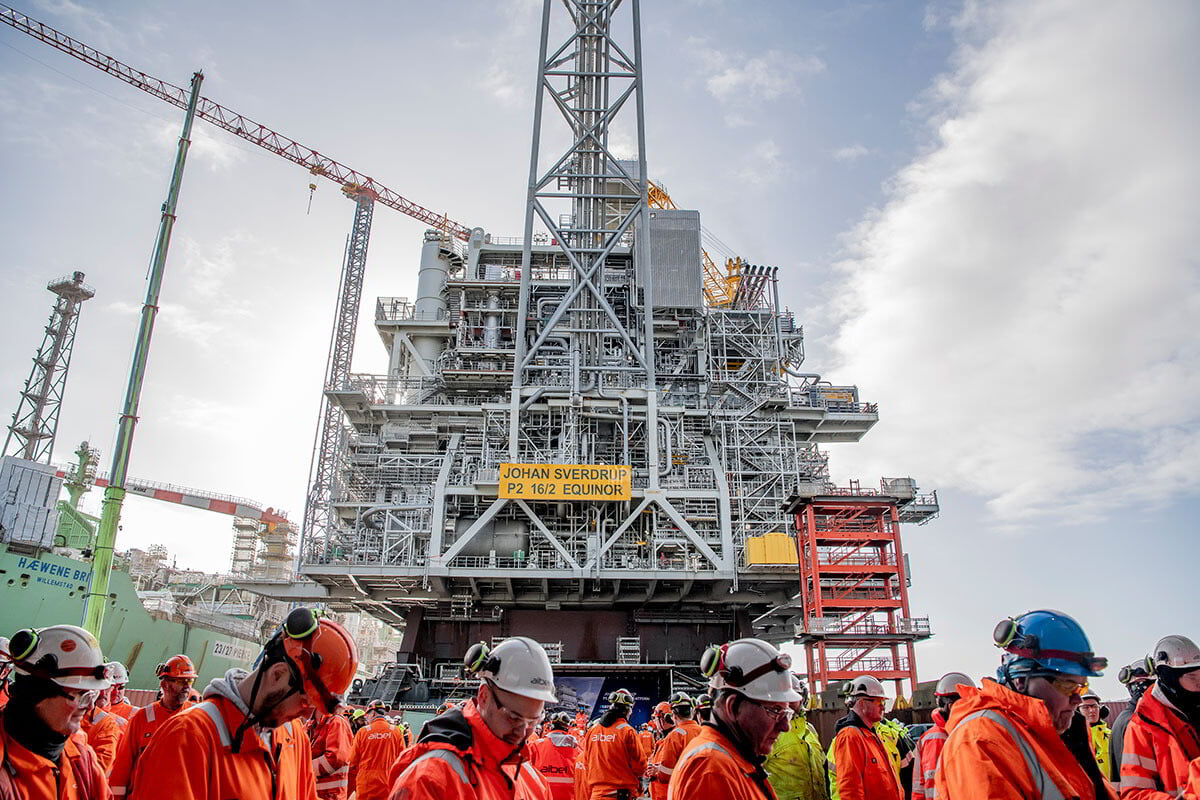 Three years after the first steel was cut, Aibel, a Norwegian contractor, has completed the construction of the second processing platform (P2) for the Equinor-operated Johan Sverdrup project – located offshore Norway – and handed it over to the state-owned giant. Aibel has stated that this is its largest delivery ever made.

Back in March 2019, Aibel cut the first steel for the second P2 processing platform and explained that the project’s construction would follow the same implementation model that Aibel had used for the Johan Sverdrup drilling platform.

At the time, the company elaborated that the platform would consist of three modules with the third module – the main structure framework (MSF) – merged with the two remaining modules – the utility process module (UPM) and the HVDC – into one platform for the Johan Sverdrup oil field.

The construction of the third module – the MSF – was done at Aibel’s yard in Thailand and the module was transported by sea to Norway in April 2021.

In a statement on Tuesday, Aibel confirmed that the second Johan Sverdrup P2 platform is ready to leave the company’s yard in Haugesund and be installed at the Johan Sverdrup field. The firm also added that it has handed over the platform to Equinor and celebrated it with a sail away ceremony for employees, guests, and the media.

Mads Andersen, President and CEO of Aibel, remarked: “In close collaboration with Equinor, our competent engineers have produced more than 60,000 drawings, which has formed the basis for our world-class skilled workers to build and assemble the platform. Even though we have been through a pandemic, we now deliver the project on time and budget, and most importantly, without serious incidents.”

The company was awarded this project in April 2018 and its records show that around 4,000 employees have undertaken approximately 20 million man-hours designing, building and completing the 25,000-tonne P2 platform, which is the second processing platform for the Johan Sverdrup field. This field now comprises five platforms.

Among the speakers at the sail away ceremony were Arne Sigve Nylund, Executive Vice President for Projects, Drilling and Procurement in Equinor, who described the P2 platform as ”clear proof of what the competent and competitive supplier industry in Norway can accomplish” and Arne-Christian Mohn, the mayor of Haugesund, who praised the delivery of this project.

In addition, the speeches included posts from the Ministry of Petroleum and Energy and the CEO of Petoro, Kristin Kragseth, on behalf of the license partners.

Aibel informed that the mooring line to the barge with the platform was cut after the speeches, adding that the platform would be towed to Digernessundet as soon as the weather allows it. Afterwards, the heavy-lift vessel Pioneering Spirit will lift the platform off the barge and bring it to the Johan Sverdrup field, located on the Utsira Height in the North Sea, 160 kilometres west of Stavanger.

According to Aibel, it has secured Johan Sverdrup contracts worth more than NOK 25 billion or over $2.8 billion since 2015, including the delivery of the drilling platform and the two onshore power plants at Haugsneset that supply the field and the rest of the Utsira High with power from shore.

“For Aibel, the contracts have also served as a catalyst to strengthen and further develop the collaboration with Equinor. Several joint improvement initiatives have been implemented, which have resulted in a number of sustained improvements, not least within safety, digitalisation and the use of new technology,” concluded Andersen.

When it comes to recent deals with Equinor, it is worth reminding that Aibel secured work on ten offshore installations and five onshore facilities in February 2022, after the state-owned giant extended agreements valued at around NOK 11.5 billion (over $1.3 billion) with Norwegian suppliers for maintenance and modification services of all onshore and offshore installations.

Meanwhile, Aibel also provided an update on offshore wind projects, which are expected to come to Haugesund, explaining that the firm has come far in the ongoing energy transformation with more than half of its order backlog being related to renewable energy and low carbon solutions.

The company further stated that four offshore converter platforms for offshore wind farms in Europe are under delivery with three of these scheduled to be installed in the world’s largest offshore wind farm, Dogger Bank Offshore Wind Farm, while the fourth one will go to the DolWin area outside Germany, where Aibel’s first wind platform DolWin beta is also located.