Canadian oil and gas producer Vermilion Energy and Irish Nephin Energy, backed by the Canada Pension Plan Investment Board, are looking into the feasibility of a renewable energy hub at the existing Corrib gas field located offshore Ireland.

The two companies revealed on Tuesday that they have started feasibility studies to develop a sustainable energy plan for their facility in North Mayo in Ireland with options being evaluated for a renewable energy hub at the site to complement the existing gas output from the Corrib gas field.

The field can produce into the mid-2030s and beyond, subject to substantial additional investment in the existing infrastructure. However, the Corrib infrastructure has the potential to deliver secure source of energy for decades to come. It is this potential the feasibility studies are intended to evaluate, the duo explained.

Developed at a cost of €3.6 billion, the facility is uniquely positioned to support the development of renewable energy generation in the West Atlantic region. Vermilion and Nephin Energy shared their excited about Corrib’s future and the contribution it can make to Ireland’s energy transition and the achievement of the country’s climate action targets.

As explained in the statement, the intent is to complete the feasibility studies, understand the potential options, and consult with stakeholders on the sustainable energy plan in due course.

The Corrib gas field is located approximately 83 km off the northwest coast of Ireland. The production from the field started in 2015 and the gas is transported to the Bellanaboy Bridge gas plant through 90km of pipeline where it is then processed prior to being delivered to the national grid.

In July 2017, Vermilion and Canada Pension Plan Investment Board announced a strategic partnership whereby Vermilion would assume operatorship of the Corrib natural gas project from Shell E&P Ireland along with an incremental 1.5 per cent working interest in the Corrib Natural Gas Project. The transaction closed in 4Q 2018.

Furthermore, in November 2021, Vermilion reached an agreement with Norway’s Equinor to buy its Corrib interest on consideration of $434 million, which will result in Vermilion having a 56.5 per cent operated interest in Corrib field. 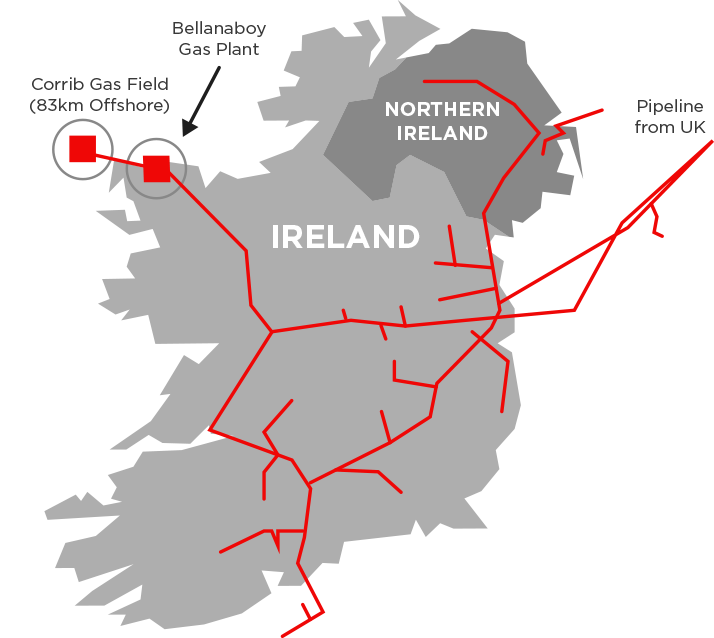