Quadrant Energy, recently acquired by Santos, has submitted a request to Australia’s offshore regulator to undertake a seismic survey in the Bedout sub-basin offshore Australia. 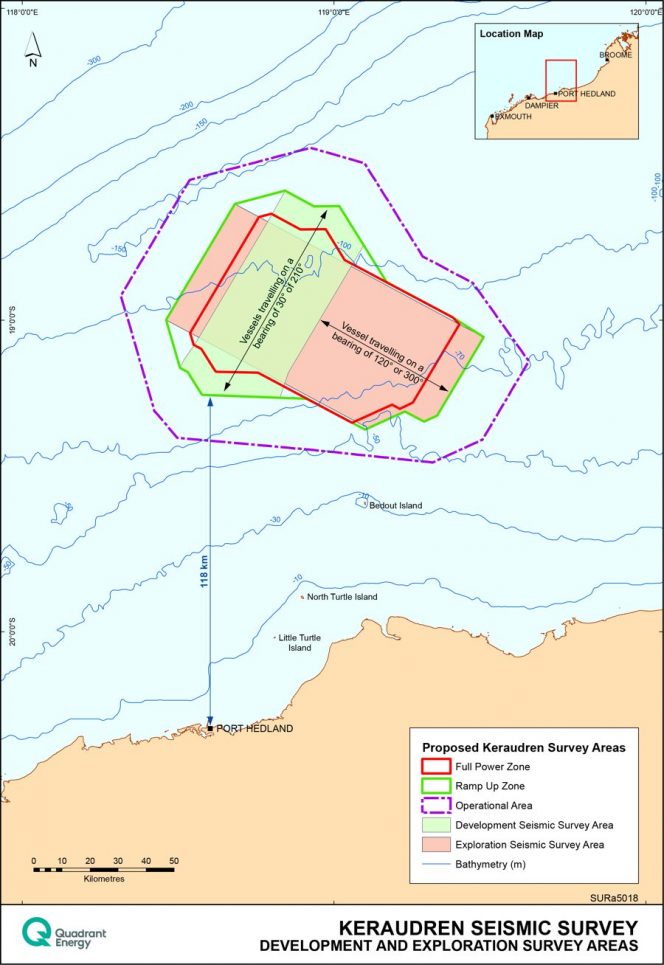 Recent exploration undertaken by Quadrant in the Bedout Sub-basin identified hydrocarbons within several reservoirs, and is now seeking to acquire additional subsurface data to further appraise the hydrocarbon resources.

The National Offshore Petroleum Safety and Environmental Management Authority (NOPSEMA) said on Friday that the proposed Keraudren seismic survey would be conducted in waters some 118 kilometers off Port Hedland in water depths from 50 m to 150 m. The survey is within petroleum permits WA-435-P, WA-436-P, WA-437-P, and WA-438-P.

According to the offshore regulator, the survey is expected to take between 80 and 110 days subject to weather conditions and vessel availability in a window between February to July 2019.

Seismic acquisition in the Exploration Seismic Survey Area will be via methods and procedures similar to other 3D marine seismic surveys conducted in Australian waters. One seismic survey vessel will tow a seismic source array and streamers to survey the area.

Seismic acquisition for the Development Seismic Survey Area will be a modified version of a typical 3D marine seismic survey and involve the use of a second survey vessel. The secondary survey vessel will be towing only a seismic source array without streamers.

The decision by NOPSEMA regarding the seismic survey will be made by January 7, 2019.