For the first time, a full pipeline survey spread has been fitted to a Saab Seaeye ROV in the shape of the Panther XT Plus.

The technological breakthrough will bring considerable savings in survey operating costs to operators when compared to deploying a 150hp hydraulic work-class vehicle for the task.

Making this breakthrough possible is the unequalled power of the Panther XT Plus. This industry leading ROV offers a powerful platform for a wide variety of tooling that expands the scope of work tasks possible in a compact vehicle.

With 10 thrusters – eight giving exceptional horizontal drive – and having 50 per cent more power than any other ROV in its class, the Panther XT Plus can handle the large array of equipment needed for full pipeline survey work – and keep working in currents at which other ROVs must be withdrawn from active service.

The installation of a complete pipeline survey system on a compact electric ROV is considered a significant technological achievement, particularly as it must work alongside other systems, including two powerful four and seven-function Schilling Orion manipulators and a contact CP measurement system, amongst other possible tools.

The technology necessary to achieve this breakthrough has come from creating a design of ROV that gives more space for tooling, an increased number of data interfaces including a Gigabit Ethernet multiplexer serial data interface, more power supplies, and an enhanced hydraulic system to handle a wide and powerful range of tooling.

The main benefit for operators is the considerable savings in the cost of ownership that comes from using a smaller and lighter vehicle that needs less deck space – around a quarter of an equivalent hydraulic vehicle – and fewer crew. It also costs less to acquire and maintain.

Operators quote the ease of moving a 14 ton system compared to one weighing 60 tons, also a faster set up time of 12 hours rather than four days, and needing 150 kVA of power generation instead of 500 kVA.

An added bonus when working to a tight deadline in hazardous conditions is that ten thrusters in hand offer a reassuringly high degree of redundancy, should one or more thruster become fouled – thereby allowing the operator to keep the ROV on task until recovery.

First to order the Panther XT Plus with a full pipeline survey package is Aberdeen-based ROVOP Ltd who undertook extensive trials of the ROV in May, with the survey package fitted, and have now purchased two systems.

Early to see the potential of the Panther XT Plus was Australia’s Cal Dive International who needed a vehicle to tackle the strong currents in Australia’s offshore oil & gas fields.

They saw the Panther was small enough to work inside rig and platform jackets, yet powerful enough to open and close pipeline valves and operate in the strong currents of open water.

Their system was fitted with a Tritech Super SeaKing sonar with dual frequency sonar head, and a Tritech altimeter with auto altitude option. It also has two Schilling Orion manipulators and, for debris clearance, a rotary disc cutter and a 38mm anvil cutter. They can also fit a water jetting system, cleaning brush assembly and manipulator-held cleaning brush tool.

Included in their multi-mission package is a Cygnus ultrasonic thickness gauge and CP proximity probe.

Having experienced the power of the ROV, they have now added a torque tool held by the 7 function manipulator, balancing the vehicle by shifting its hydraulic power pack and control box.

A company that has reported significant savings in operational costs since deploying their Panther XT Plus in the shallow waters of the upper Persian Gulf, is Abu Dhabi-based, CCC (Underwater Engineering) who has found that their Panther can perform 90 per cent of the tasks normally undertaken by their 150 HP hydraulic work-class ROVs with major savings in costs and logistics, particularly as smaller support ships can be used.

Across a range of operators, the technological advances in the design of the Panther XT Plus and its versatility, has demonstrated that a compact ROV with a small footprint can undertake more work tasks than was ever thought possible in an electric ROV. 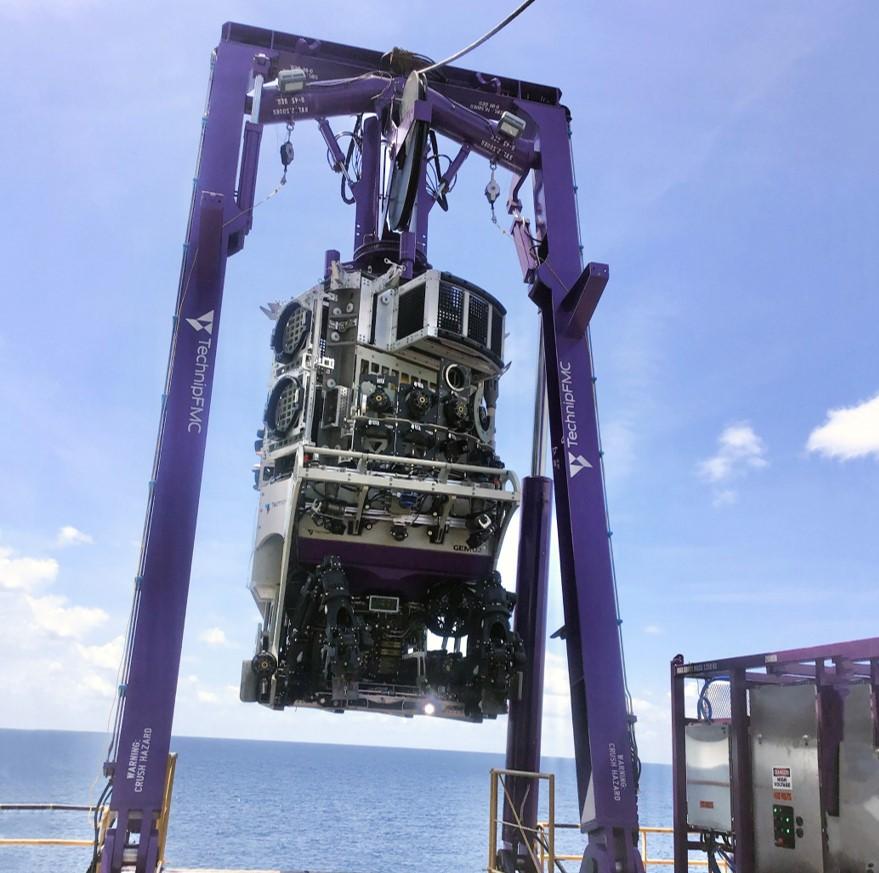