The launching ceremony for the vessel took place at Jiangnan Shipyard on 16 August 2021, just over a year after the first steel was cut.

The ship was ordered back in 2019 from China Ship Building Trading and Jiangnan Shipyard Group, together with two more newbuilds set for delivery in 2022.

Battery power on the new vessels is expected to improve operational efficiency and further reduce emissions through peak shaving. It will also provide an option for reducing emissions while in port.

The shaft generator will enable the vessel to recharge its batteries while at sea so it can run the bow thruster in/out of port solely on battery power, contributing to reduced emissions in line with port authority requirements.

“There have been a number of technical challenges to overcome, such as streamlining the shaft generator for a dual-fuel engine and determining whether the bow thruster could run on battery power when entering and leaving port,” head of ship management and newbuilding of UECC Jan Thore Foss commented.

However, the issues were resolved by the Jiangnan Shipyard Group’s internal design firm which carried out engineering work to adapt the hybrid technology.

The use of a battery hybrid solution will enable UECC to exceed the International Maritime Organisation’s (IMO) target to reduce carbon intensity by 40% from 2008 levels within 2030, according to the company.

“Emissions of carbon dioxide will be reduced by around 25%, SOx and particulate matter by 90% and NOx by 85% from the use of LNG, while the newbuilds will also meet the IMO’s Tier 3 NOx emissions limitations for the North Sea and Baltic Sea,” UECC noted.

In March 2021, the firm reported massive CO2 emissions cuts by using biofuel onboard one of its RoRo vessels.

The second LNG-hybrid PCTC is due for final delivery along with the third vessel in the first half of 2022, while the first unit launched earlier this year is set to be delivered later this autumn after final commissioning.

Once delivered, the newbuild trio will give UECC five eco-friendly PCTCs out of its 17-vessel fleet as the company continues to move forward to a green shipping future. 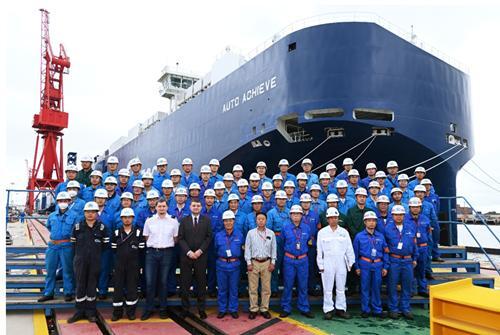