The contract has been signed with Kawasaki Heavy Industries, and the vessels will be constructed at the shipbuilder’s joint venture NACKS shipyard in Nantong, China. Deliveries of both vessels will be in the second half of 2016.

The vessels will be 181 meters long and have a 30-meter beam. They will be Finnish/Swedish ice class 1A Super vessels, thus allowing for full-year trading in the Baltic area. Each ship will be capable of transporting approximately 3,800 standard-sized vehicles over its 10 decks. A significant amount of the cargo capacity can also be used to transport high and heavy cargo, in addition to cargo loaded onto MAFI trailers. The deck configuration will be optimized for both current and expected cargo mixes.

The vessels will be capable of operating on either LNG fuel or heavy fuel oil and marine gas oil, thus providing greater flexibility and efficiency. These ships will be the first PCTCs to be fitted with an LNG-fuel propulsion system and will be able to complete a 14-day round voyage in the Baltic using solely LNG fuel for main engine and auxiliary power generation.

LNG is recognized as the cleanest and most environmentally friendly choice of fuel suitable for marine transport. The use of LNG significantly reduces CO2 emissions, as well as almost eliminating sulphur oxide emissions and other particles. According to UECC CEO Glenn Edvardsen, “The LNG installation is a pioneering design and will be one of the largest employed on a commercial vessel and the largest yet of its kind on a pure car and truck carrier. We are proud of the exciting step UECC is taking towards greener and more environmentally friendly shipping.”

The vessels will employ a number of other design elements and technologies to help reduce fuel consumption and emissions, ensuring safer and more efficient operations. With a capacity for approximately 3,800 cars, these ships will be the largest PCTC-type vessels specifically designed for transiting the Baltic and other ice-prone areas. “UECC will be able to provide our customers with transportation in the Baltic area with unparalleled efficiency, reliability, and superior environmental performance,” Edvardsen stressed.

The vessels have been jointly developed by UECC in close collaboration with NYK’s Technical Group and Wallenius Marine, together with Kawasaki Heavy Industries in Japan. 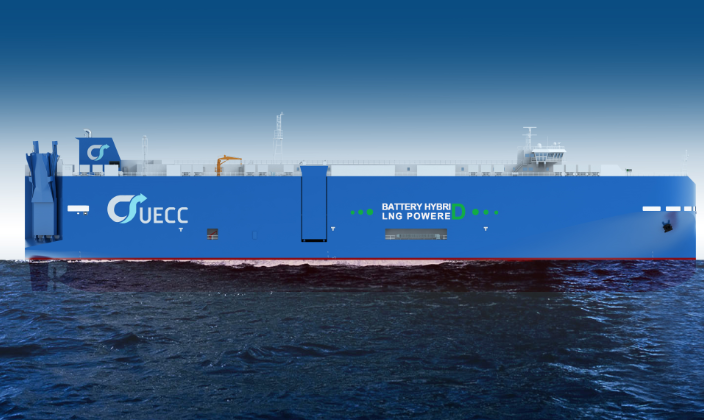