As informed, the christening ceremony of the new PCTC took place at the Port of Gothenburg on 16 November. The 169.1.-meter-long ship was named Auto Achieve.

Auto Achieve, which was delivered this June from China’s Jiangnan Shipyard, is propelled by LNG combined with battery hybrid technology, which is expected to improve operational efficiency and further reduce emissions through peak shaving, in addition to handling partial accommodation load and driving auxiliary equipment.

According to UECC, the latest green technologies incorporated onboard the vessel will enable a carbon dioxide emissions reduction of around 25%, SOx and particulate matter by 90% and NOx by 85% from the use of LNG. Already today, the vessel’s fuel efficiency meets IMO:s 2030 target of a 40% reduction in carbon intensity, UECC stressed,

The PCTC is also adaptable for low-carbon fuels such as bio-LNG and synthetic fuels as these become available.

“Imminent regulatory changes are shifting the market landscape in favour of green-focused players and these newbuilds represent timely and sizeable investments that offer our clients a sustainable shipping solution with both environmental and cost benefits,” said UECC CEO Glenn Edvardsen as the last in this series of vessels was launched from Jiangnan in China Shipyard this fall.

The ship joined its sister vessel Auto Advance which was named last month. The third vessel Auto Aspire was also christened at the same event.

The deliveries of the three newbuilds over the past year have proven timely given the International Maritime Organisation’s (IMO) CII and EEXI/EEDI regulations to cut the carbon intensity of both new and existing vessels are due to kick in from 1 January 2023.

All three PCTCs already exceed the IMO requirement for a 40% reduction in carbon intensity by 2030 which is the purpose of these regulations, according to the company. 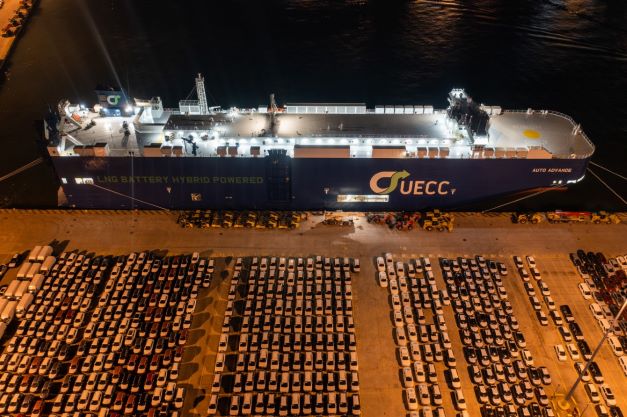