Container terminal operator APM Terminals, part of A.P. Moller Maersk, has signed a letter of intent with Plaquemines Port, Harbor and Terminal District (PPHTD) to become the operator of a newly planned container terminal and intermodal rail facility in Louisiana.

The two parties started discussions on APM Terminals taking over the terminal operations in May this year. They were in a formal discussion phase whereby both parties committed to conducting multiple studies prior to making a final investment decision.

Under the new deal, PPHTD and its financial partners will manage the financial activities associated with the infrastructure development, investment, and ownership of the port.

The facility, which is in the early stages of development, is located on the Mississippi River just 50 nautical miles from the Gulf of Mexico. The terminal will be environmentally-friendly, powered by a combination of natural gas and electricity, encompassing up to 1,000 acres and 8,200 feet of Mississippi River frontage.

“Our vision is to create a new port with an entirely new supply chain network into the United States. We will have multiple routing options to inland markets which give supply chain planners the resiliency and contingency layers essential to manage future supply chains effectively,” PPHTD Executive Director Sandy Sanders said.

The special focus will be on utilizing modern infrastructure technology and engineering to withstand storm surges and wind damage in the design of the port. The port and connecting infrastructure will be built 16 feet (4.8 meters) above sea level. Phase one of construction is expected to last two years and will deliver the capability to handle 22,000-TEU class vessels with the ability to expand capacity as needed.

The Army Corps of Engineers will focus on bolstering levees around the site and connecting infrastructure. To further mitigate flood risk, the port has adopted a Multiple Lines of Defense Strategy to restore coastal wetlands in the frontline of the storm surge and provide additional protection to hurricane levees that surround the facilities. 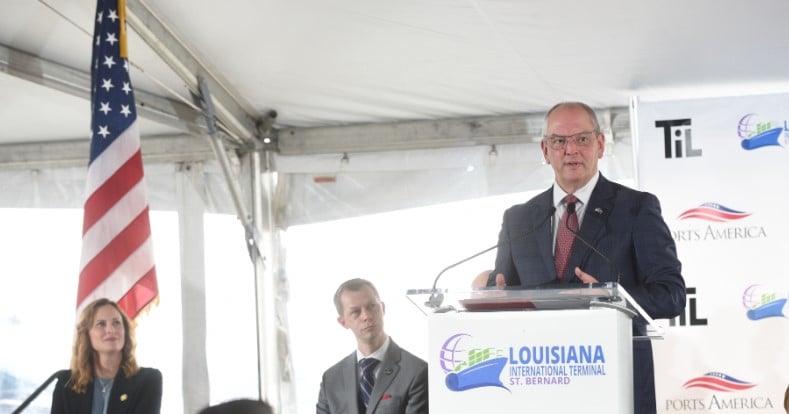