DOF Subsea, a specialist subsea services business, recorded a decrease in its third quarter 2017 profit when compared to the last year’s performance affected by impairment charges amid challenging market conditions.

Impairment of NOK 167 million has been recognized during the third quarter of 2017.

During the period, the group has seen lower activity in the APAC region with delayed start-up of projects and low utilization of both personnel and assets. In the North America region, the activity gradually increased during the quarter. The company noted that the general market conditions within the industry are still challenging, however in line with the rebound in the oil price the tendering activity has increased during the quarter for projects with start-up in 2018 and 2019.

During the quarter, the group said it has seen weak performance and low vessel utilization in the Subsea/IMR Projects segment.

At the beginning of the third quarter, Skandi Constructor was in transit from Singapore to the North Sea and Geosea was in transit from Brazil to the North Sea. During the quarter Geoholm finalized the upgrade and modification and started a new contract with TechnipFMC. Skandi Singapore and Skandi Hercules, operating in the APAC region, had low utilization in the quarter due to delayed start-up of projects and idle time between projects.

In general, the idle time between projects has increased, however the group saw increased project activity toward the end of the quarter. The vessel utilization in the 3rd quarter was 74%, where the long-term chartering utilization was 86% and the Subsea/IMR Projects utilization was 70%.

The group’s current portion of debt at the end of September was NOK 1.69 billion, including balloons, bond, drawn credit facilities and ordinary installments. The current weak market conditions have increased the risk for impairment of the group’s non-current assets and put pressure on the group’s liquidity position.

As at September 30, 2017, the number of subsea employees was 1 287, and the group’s fleet comprised 22 owned vessels, two chartered-in vessels and two newbuilds under construction,
plus a fleet of 71 ROVs.

As at end of September, the firm contract backlog amounts to NOK 16.3 billion, and including options NOK 34.3 billion. However, the group is exposed to the short-term market conditions in the Subsea/IMR Projects segment. In this segment the management is working to increase the backlog and improve the utilization of personnel and assets. 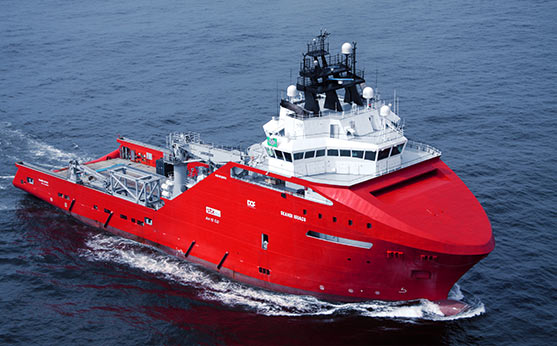