The first milestone is the launching of MSC’s first LNG-powered vessel MSC World Europa. The ceremony took place at the shipyard in Saint-Nazaire where the ship will now be moved to a wet dock for work until its delivery in November 2022. The keel-laying ceremony for the 205,000 gross ton cruiser was held in June last year.

On the other hand, the companies also hosted a coin ceremony for LNG-powered newbuild MSC Euribia, which will become one of the most environmentally advanced ships in MSC Cruises’ fleet to date, according to the company. The French shipbuilder cut the steel for the vessel in June this year.

Both of the vessels will feature the latest environmental technologies to meet the decarbonization targets introduced by the International Maritime Organisation (IMO). The vessels are set to be fitted with four dual-fuel engines provided by Finnish tech company Wärtsilä  generally running on LNG, occasionally on 0.1% sulfur marine gas oil (MGO) so the ships will not require scrubbers.

The companies recognized the importance of LNG as a marine fuel, which is said to eliminate local air pollutant emissions like sulfur oxides (99%), nitrogen oxides (85%) and particles (98%). In terms of emissions with a global impact, these two ships have the potential to reduce CO2 emissions by up to 25% compared to standard fuels, the companies emphasized.

“Today is another important milestone in our journey towards net zero emissions by 2050 for our marine operations. Following billions of euros of investment, we are announcing significant construction developments in not just one but two of our next generation LNG-powered vessels bringing us ever closer to our vision of an emissions free cruise industry. As the cleanest fuel currently available at scale for our operations, LNG is at the vanguard of the momentous energy transition we must go through,” Pierfrancesco Vago, Executive Chairman, MSC Cruises, said.

“We have a lot more to do but I am pleased that despite all that we have faced from the pandemic over the last two years, we have still been able to achieve with our partners at Chantiers de L’Atlantique the launch of these new LNG vessels – the first ever made in France that will also introduce potential new fuel cell technologies to make them even more efficient. We now need to take even bigger steps and we will need the continued support of our suppliers, partners and Governments to achieve this. We all need to work together to achieve our green future.”

Furthermore, the LNG-powered newbuilds will also have shore-to-ship power connectivity, allowing them to switch off its engines and connect to local power grids at ports. They will be fitted with automatic data collection systems for remote energy monitoring and advanced analysis, allowing real-time shore side support to optimize operational efficiency onboard.

Additionally, the partners announced the installation of a fuel cell pilot plant on board MSC World Europa known as Blue Horizon. The technology will use LNG to convert fuel into electricity, producing electricity and heat on board. The fuel cell technology selected by Chantiers de l’Atlantique (CdA) and MSC Cruises is the solid oxide fuel cell (SOFC) developed by Bloom Energy.

\The SOFC is expected to reduce emissions of greenhouse gases (GHG) by about a further 30 percent compared with a conventional LNG engine without producing emissions of nitrogen oxides, sulphur oxides or fine particles.

It also offers the advantage of being compatible with LNG, as well as several low carbon fuels such as types of methanol, ammonia and hydrogen.

This project will form the building block for future larger installations and the beginning of a closer collaboration between MSC Cruises and Chantier de L’Atlantique on the research and development of fuel cell technology, the companies concluded. 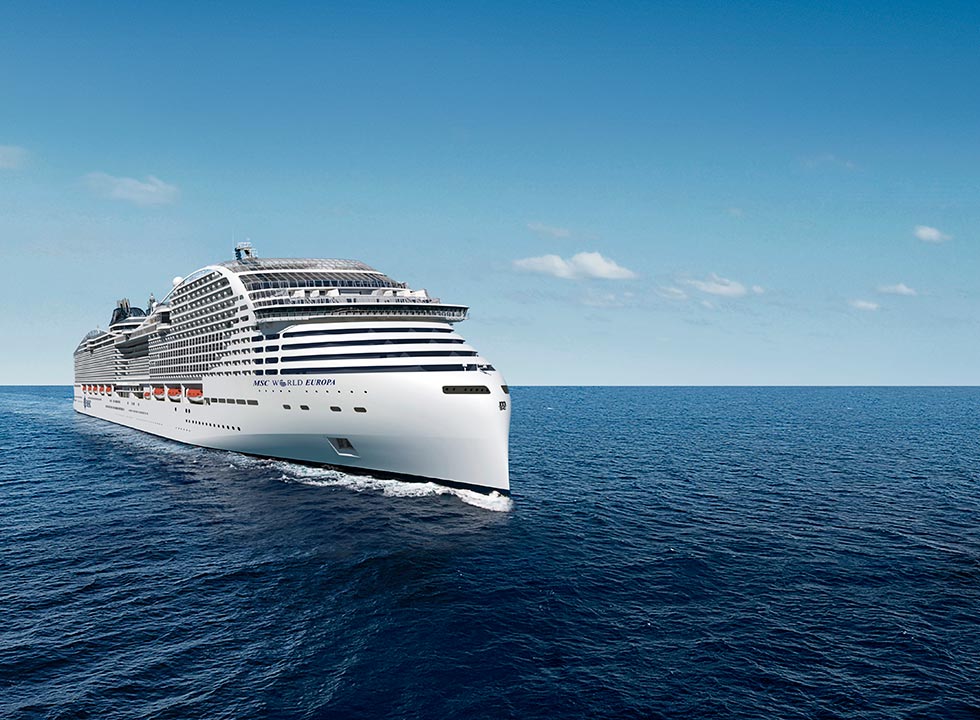