HEGRA, a company that aims to electrify and decarbonize the ammonia plant at Herøya and enable large-scale green ammonia production, was launched in Norway on 16 August 2021.

HEGRA is short for HErøya GReen Ammonia, and is co-owned by Yara, Aker Clean Hydrogen and Statkraft each owning 1/3.

“Aker, Yara and Statkraft have established HEGRA with the ambition of creating new industry in Norway that provides a competitive advantage in a growing global hydrogen economy, establishes green jobs for the future and forms the basis for a future Norwegian export industry,” CEOs Svein Tore Holsether, Øyvind Eriksen and Christian Rynning-Tønnesen in Yara, Aker and Statkraft, said, respectively, in a joint statement.

Green ammonia, produced using renewable energy, would enable the production of carbon-free fertilizer, and is said to be a promising zero-emission fuel for the maritime sector.

As explained, HEGRA will contribute to creating a new industry based on a regional hydrogen and ammonia market, whilst ensuring the survival and competitiveness of the Norwegian maritime and processing industries.

“HEGRA is more than a new industrial company, it is Norway’s largest climate initiative. The decarbonization project will reduce CO2-emissions by 800,000 tonnes annually, equivalent to 300,000 fossil-fueled cars. It marks the beginning of developing a Norwegian value chain for green ammonia and hydrogen,” Auke Lont, Chair of HEGRA’s Board, pointed out.

The costs of emissions in the processing industry are expected to increase in the international market as a result of regulations and customer demands. To achieve the necessary emission reductions, the Norwegian industry and maritime sector need access to clean hydrogen and ammonia.

HEGRA brings together Norway’s experts in ammonia, project development and energy markets. Provided that power is available at site and the required public co-funding is in place, the project could be realized already 5-7 years from now.

“HEGRA is geared specifically at meeting the ambition of the European Commission’s «Fit for 55» package, which aims to reduce EU emissions by 55 per cent by 2030. HEGRA will give Norway a competitive advantage within renewable energy and hydrogen and put Norway in a great position to reach climate ambitions,” Lont added.

The Norwegian maritime industry is set to cut its emissions in half by 2030. Access to emission-free fuel will be key to reach this goal, according to HEGRA project partners.

The existing global infrastructure for ammonia will facilitate Norwegian green ammonia to become a global commodity immediately. With renewable energy in abundance, Norway seems to be in a good position to capture a large share of the emerging global green hydrogen and ammonia value chain.

A report published in 2020 by The Confederation of Norwegian Enterprise found that the hydrogen industry can become a significant Norwegian export industry, with an estimated turnover of NOK 10 billion in 2030 and NOK 70 billion in 2050.

“The timing of HEGRA is important because it will be key to establish a well-functioning domestic and regional market before the global demand for ammonia increases. We look forward to engaging with authorities and the industry on how to realize one of the first large-scale industrial projects within green hydrogen and ammonia in Norway,” Lont concluded. 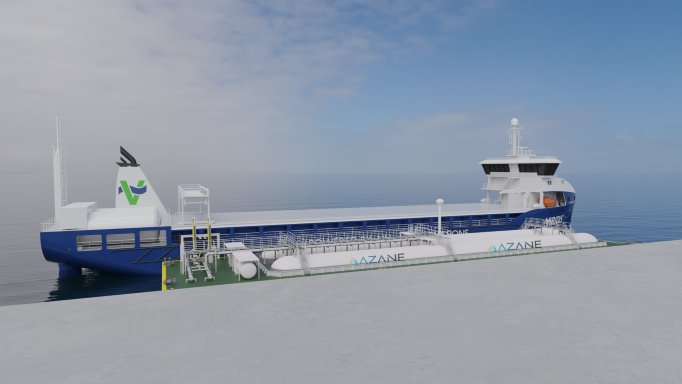